Super Pit gold mine – Australia, recorded by the Sentinel-2A satellite on November 21, 2022 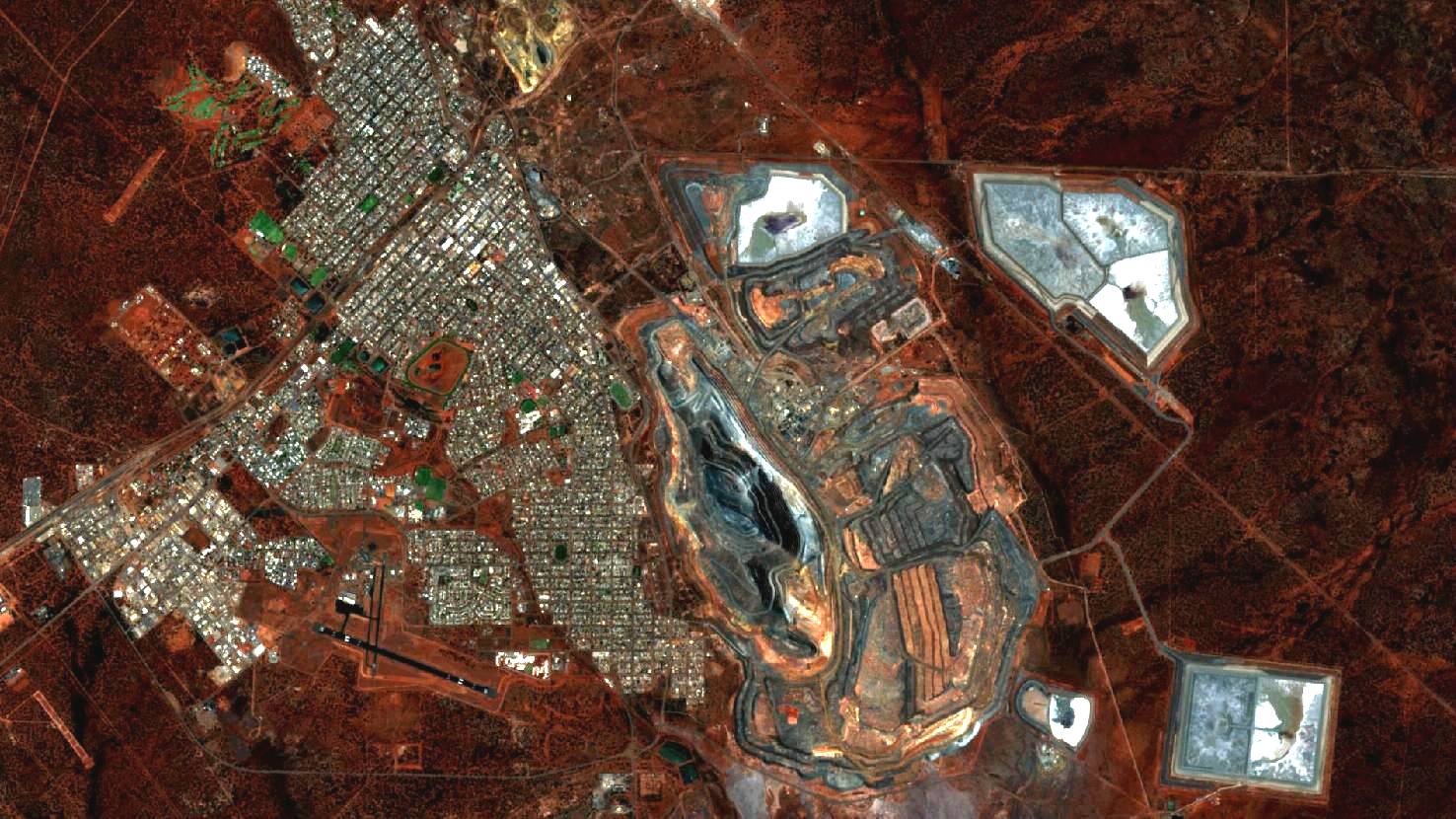 This month’s satellite image shows Australia’s largest gold mine in terms of area: the Super Pit gold mine.

The image shown is based on multispectral satellite data from the Sentinel-2 satellite of the EU Copernicus program. These data are available free of charge. After downloading, the data was atmospherically corrected and a natural color composite (bands 4, 3, 2) was calculated using free software.
This “natural color” combination looks as similar to “real color” as is possible with Sentinel-2 data. The three bands of visible light that we see as red, green and blue are used here, so the image appears in colors similar to what we perceive with our eyes. Vegetation is green, recently harvested fields are very bright, soil is yellowish brown, and roads and buildings appear gray or red (depending on the roof). Clouds and snow appear white and are hard to distinguish. Different types of vegetation are also difficult to distinguish as well as shallow water and soil. Sometimes this band combination appears hazy because these three wavelength ranges cannot penetrate the atmosphere well. The three bands allow a spatial resolution of 10 m.

The Super Pit gold mine borders the southeast of the town of Kalgoorlie-Boulder in Western Australia and is a gold mine operated as an open pit. It is visible to the right of the urban structures as an elongated dark shape with light structures similar to contour lines. The area of today’s town, as well as the mine, is originally land of the Maduwangka Aborigines. With a depth of 600 meters and an extension of 1.5 x 3.5 kilometers, it is the largest mine in Australia in terms of area, which can be easily imagined on the satellite image in relation to the adjacent city of Kalgoorlie-Boulder. In terms of production, however, it ranks only second among Australian gold mines. Prior to 2018, it was still one of the ten largest gold mines in the world, but was unable to maintain this position due to a 17% drop in production. Thus, in 2018, after the loss, the mine produced 628 000 troy ounces of gold, equivalent to 19.5 tons.

The (European) settlement and mining history at the site started in 1893 when Irish settlers found gold, which triggered a gold rush in Australia. As a result, the present city of Kalgoorlie-Boulder (then Kalgoorlie) grew over the subsequent years and eventually housed 30,000 people (1903). Initially, gold was mined, and later it was also extracted at depth in small mines. The successful aggregation of several mines into one mine was, after a failed attempt, not achieved until 1989. This aggregation formed the basis for today’s Super Pit gold mine.

The mine is located in the Norseman-Wiluna Greenstone Belt geological formation. The rock hosting the gold veins is a fractured tholeiitic gabbro. The gold-bearing deposits mined at the mine contain about 30% gold and other gold-bearing compounds, such as gold tellurides (25%). In some veins, the gold content ranges up to thousands of grams per ton in contrast to the average gold content of 2.5 grams per ton of rock. To be able to achieve the annual production rate, 240,000 tons of material are moved daily. The waste rock, which is no longer required for gold production, is clearly visible on the white-grey heaps to the east of the mine.