Satellite image of the month – January – Coast near Bissau (Guinea-Bissau)

Coast near Bissau – Guinea-Bissau, recorded by the Sentinel-2A satellite on May 10, 2016 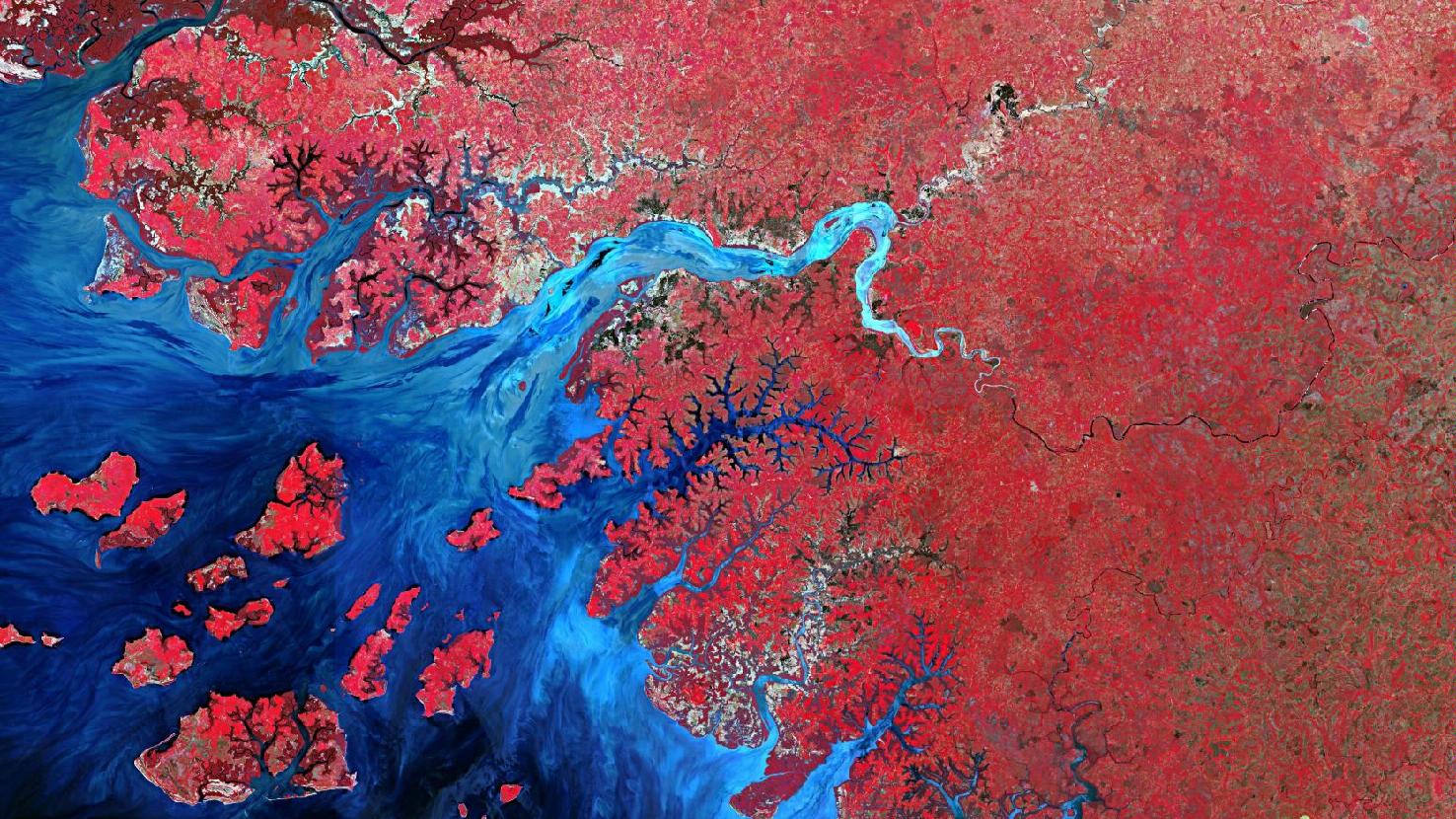 The satellite image of the month January shows the highly rugged coastal strip around the city Bissau, the capital of Guinea-Bissau.

The Sentinel-2A image shows a colour-infrared composite created from different bands, with a spatial resolution of 10 metres. Sentinel-2 data from the EU Copernicus programme are multispectral satellite images that are freely available. After downloading the scene, an atmospheric correction was carried out with free software and the colour composite was calculated with the bands 8 (near infrared), 4 (red) and 3 (green). The chosen colour-infrared representation is particularly well suited for the detection of vegetation. Vegetation appears in different shades of red, older vegetation in green, soil in shades of brown and green. Urban regions are depicted in brownish-grey, water in bright blue tones.

Guinea-Bissau is a state on the west coast of Africa. It borders Senegal to the north, Guinea to the east and the Atlantic Ocean to the west. The capital, Bissau, has about 400,000 inhabitants. The city is located in the west of the country in the Géba Delta. In the picture, it is located in the upper left quarter, recognisable as a relatively thick brownish-blue spot on the north side of the widest river delta.

The interior of Guinea-Bissau is predominantly flat. The coastal region provides many marshy areas and is strongly rugged by marine erosion. A multitude of rivers branch out along the Atlantic coast, like a network of roots. The largest and most important rivers, from north to south, are the Río Cacheu, Río Mansoa, Río Gêba and Río Corubal. They meander from east to west through the lowland plain of the country. On the satellite image, the Río Cacheu can be seen at the very top left edge. South of it, the Río Mansoa flows into the Atlantic. The lighter, wide river mouth is the mouth of the Río Géba. The actual Río Géba comes from the northeast. It is joined by the Río Corubal coming from the southeast (the confluence happens at the large bend of the river). Further south, more, partly smaller rivers and their widely branching estuaries into the sea can be seen.
The coastal valleys are mainly used for agriculture, especially for rice cultivation. The light, brownish patches along the river courses are often many small agricultural plots.

The different colouring of the rivers results from the transport of nutrients, sediments and organic material such as leaves, roots or bark. Depending on the type and amount, the water appears in different shades on satellite images. Here, the lighter colouring of the Río Géba, which seems to transport a larger load, is particularly striking.
The islands in the Atlantic Ocean form the Bissagos Archipelago, which is made up of the most important islands of the country. The largest island is Ilha de Orango, pictured in the lower left corner.