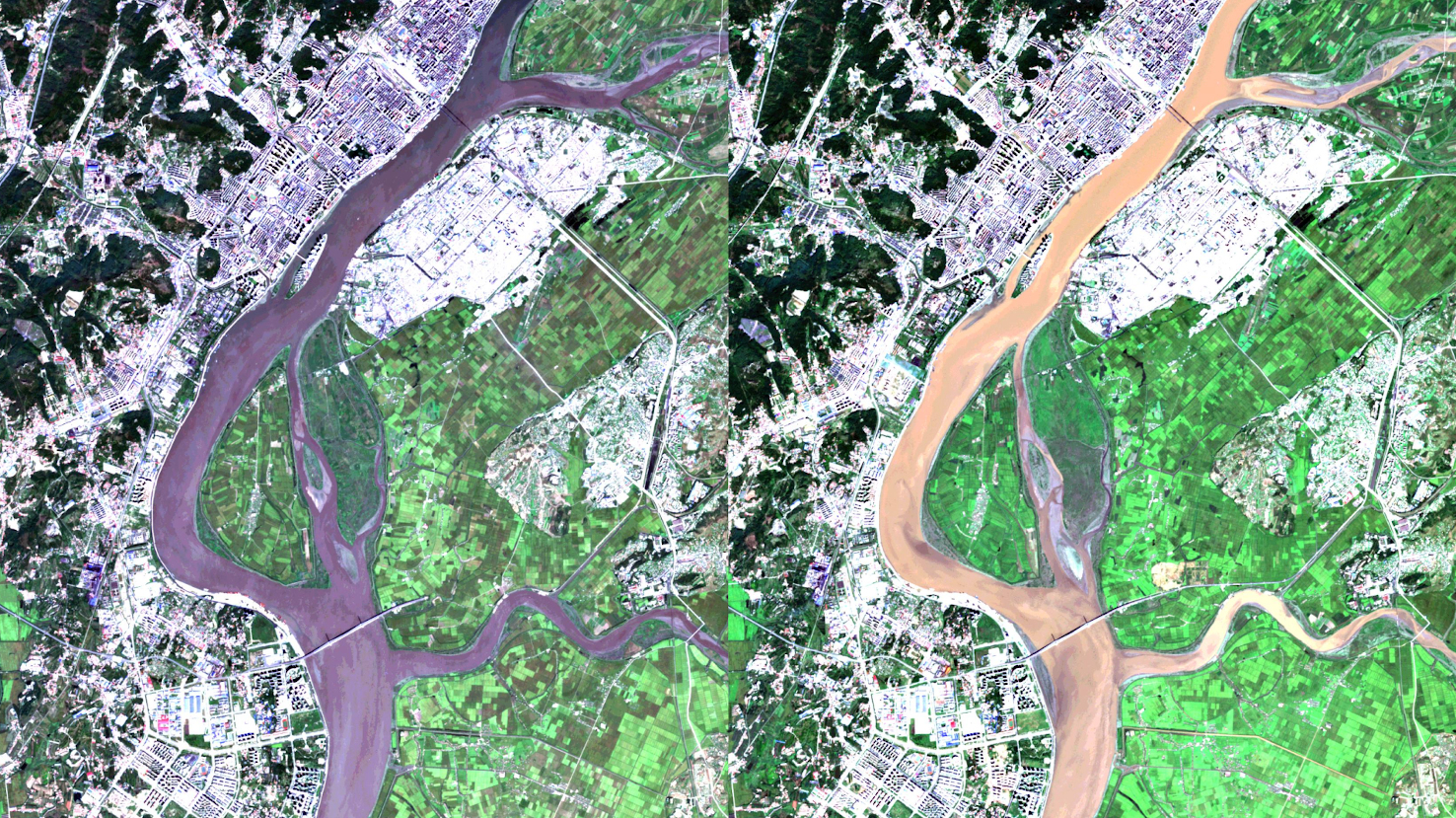 Our satellite image of the month January shows a part of the China-North Korea border.

The two images show a composition of different bands based on Sentinel-2 data from the Copernicus programme. After the download, the freely available multispectral satellite images were atmospherically corrected with free software. Hence, a true color composition was computed using the three bands red, green, and blue. With this composition, the image appears in colors similar to what we perceive with our eyes. Vegetation is green, recently harvested fields are very bright, soil is yellowish brown, and roads and buildings appear grayish (to whitish). The spatial resolution of the image is 10 meters.

The images each show the same section: the left image is from September 2019, while the right image is from September 2021.
Centrally through the image runs the Yalu River, its flow direction in the image is from top to bottom and it flows into the Yellow Sea a bit south of the image. Over a distance of 800 km, the Yalu forms the western part of the border between the People’s Republic of China (China) and the Democratic People’s Republic of Korea (North Korea). On the left side of the picture the Chinese city of Dandong is located, while on the right side of it lies the North Korean city of Sinŭiju. The color of the river in the image depends on its sediment load as well as to some extent on the image processing.
Nowadays, two bridges span the river: at the top of the image, visible as a dark, narrow line across the river, the Sino-Korean Friendship Bridge (also China-North Korea Friendship Bridge), and at the bottom of the image, in a lighter tone and much wider, the New Yalu River Bridge.

The Sino-Korean Friendship Bridge, formerly the Yalu River Bridge, was built by Japan between 1937 and 1943, during the Japanese occupation of the area. Nowadays, it is an important junction for trade of goods and commodities between China and North Korea. However, pedestrians are not allowed to cross the bridge.
Directly parallel to the Sino-Korean Friendship Bridge, another linear structure can be seen. This is the old Yalu River Bridge built in 1911. Both bridges were destroyed by US bombs during the Korean War in 1950. The older of the two bridges was not rebuilt on the North Korean side. Today it is called Duàn qiáo, which means Yalu River Broken Bridge. On the Chinese side, four of the old arches can be visited by tourists.

Due to the age and lack of capacity of the Sino-Korean Friendship Bridge, in 2010, both countries decided to build a new bridge a few kilometers downstream. This New Yalu Bridge was built between 2011 and 2014. The cost of the three-kilometer-long cable-stayed bridge was about $350 million and was borne by China alone. The new bridge is expected to carry about 60% of the trade volume between the two countries. However, the bridge was not opened after completion because on the North Korean side it ended in a field. This status can be seen well in the left satellite image from September 2019. The bridge, which can be detected as a white-greyish stripe, ends in (green) fields after crossing the river.

The Chinese border city of Dandong had hoped for major economic development. High-rise districts were built around the bridge, and hotels, parks and markets were established. The bridge was to become a new trading post with a customs station, border guard and quarantine station. But due to delays on the Noth Korean side, the bridge was never connected to the road network. In 2019, things started to move when the President of the People’s Republic of China, Xi Jinping, pledged funding to connect the bridge to the North Korean road network. In the picture on the right, from 2021, it can be seen that construction work has been carried out or at least has started.