Satellite image of the month – May – Bonn (Germany) 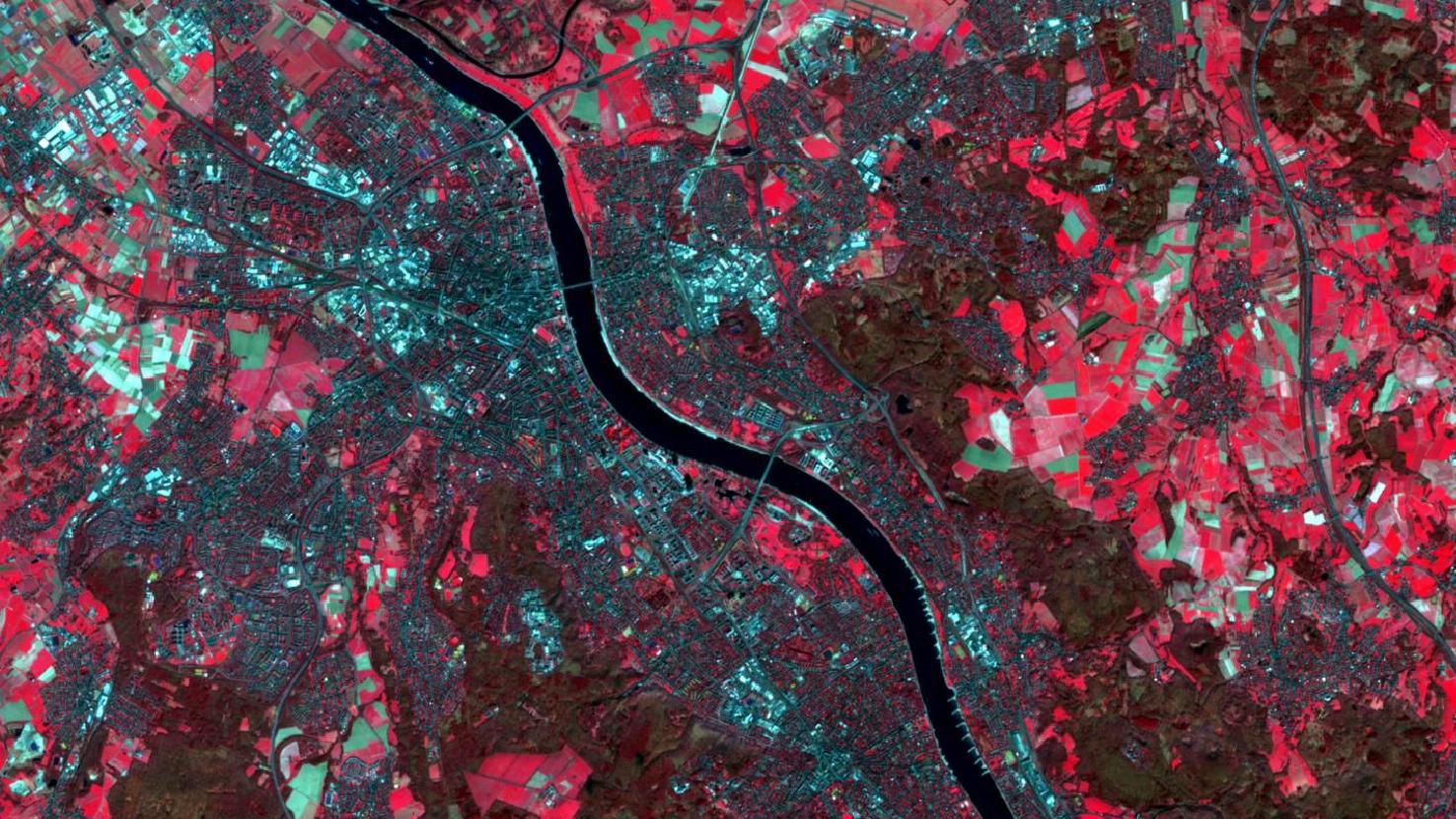 The satellite image of the month May shows the city of Bonn in western Germany.

The image is based on multispectral images from the Sentinel-2 satellite of ESA’s Copernicus program. After downloading the freely available data, the scene was atmospherically corrected using free software. To subsequently display it as a false color composite, bands 8 (near infrared), 4 (red), and 3 (green) were used. This color-infrared scene is well suited for detecting vegetation. Healthy vegetation appears in various shades of red, older vegetation in green. Soil is displayed in shades of brown and green, and urban regions in blue-gray. The selected bands allow a particularly high spatial resolution of 10 m.

Bonn is a city in western Germany. It is located directly on the Rhine, one of the longest rivers in the country, which runs through the image like a dark band. The city’s districts are connected by three bridges. The center of Bonn is located on the left side of the Rhine. In the city center, you will find the Beethoven House, the historic City Hall and the Friedrich Wilhelm University – by the way, mundialis also has its head office here. Since the city has gradually grown together from many smaller villages, its structure appears unornamented when viewed from above.

Due to the color composition of the picture, particularly green spaces catch the eye as they appear as bright red areas. Thus one recognizes in the center of the city as a red square area the “Hofgarten”, a large meadow in front of the castle of the university. Further south on the Rhine, one can recognize a large park, the “Rheinauen”. In the south of the city begins a large forest area, the Kottenforst, which appears in the picture as a red-greenish area. On the right side of the Rhine, the city borders the hills of the forested Seven Mountains, also visible as darker areas on the satellite image.

Furthermore, Bonn is best known as the former capital of West Germany. The seat of government of the was in Bonn from 1949 to 1990. Today, several ministries are located in the federal city, along with numerous important international organizations. The UN Secretariats of the United Nations Framework Convention on Climate Change (UNFCCC) and to combat desertification, among others, are based in the Federal Quarter, which lies to the north of the „Rheinauen“. Particularly striking is the “Tall Eugene”, a high-rise building that houses some organizations of the United Nations. The district is dominated by several skyscrapers, including the Post Tower, the tallest German skyscraper outside Frankfurt. On the satellite image, the two buildings appear due to their shadow as dark columns above the Rheinaue. Also, next to it, the World Conference Center Bonn (WCCB) in which international conferences take place frequently, is situated.

From May 23 – 27, the WCCB will host the Living Planet Symposium of the European Space Agency (ESA), one of the world’s largest conferences on Earth observation. The symposium will focus on environmental and climate insights gained through new technologies and satellite data, and how Earth observation can contribute to resilient societies and a sustainable future. mundialis will participate with lectures and posters on their current projects, that are listed here. The full conference program can be found here.