Satellite image of the month – May – Fuji (Japan) 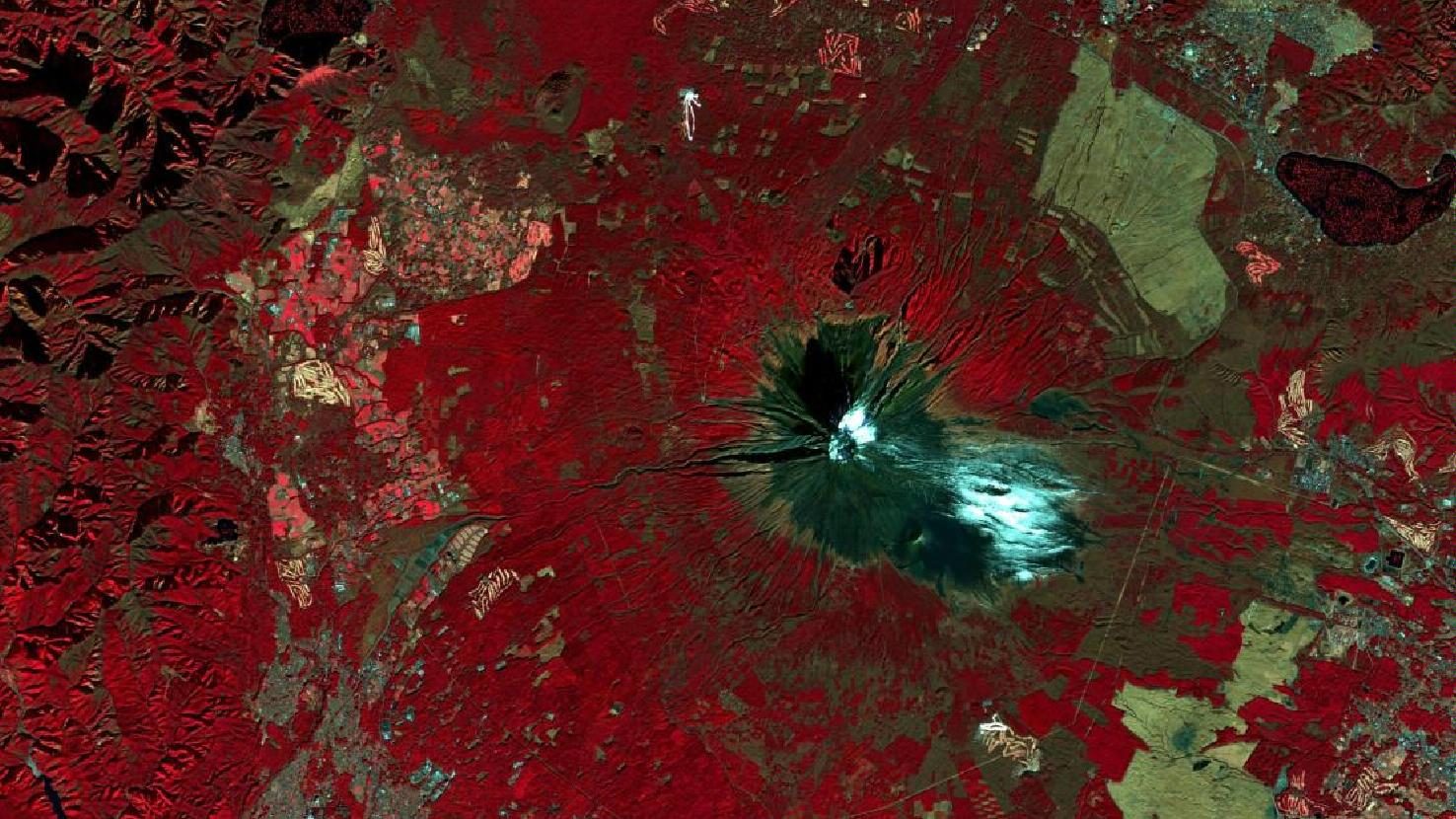 The satellite image of the month May shows a false colour composition of Mount Fuji in Japan. The image is based on Sentinel-2 data from the Copernicus programme. Sentinel-2 data are multispectral satellite images which are free to obtain. After downloading the scene an atmospheric correction was carried out with free software and a colour composition was calculated using three different spectral bands. The chosen colour infrared (vegetation) composite is particularly well suited for visualizing vegetation. Vegetation appears in different shades of red, older vegetation in green, soil in shades of brown and green, urban regions in blue-gray, clouds, snow and ice are light turquoise or white.

The Mount Fuji volcano is located on the main Japanese island of Honshū on the border between the prefectures Yamanashi and Shizuoka. At 3,776 meters above sea level Mount Fuji is the highest mountain in Japan. The colouring in the satellite image allows to clearly distinguish the vegetatd parts of the mountain from the non-vegetated part. Its unvegetated summit is covered with snow for about 5 months of the year. What is also clearly visible is the very symmetrical cone shape of the stratovolcano. Thanks to its characteristic shape, Mount Fuji is a cultural symbol of Japan and a popular tourist destination and artist’s subject.

Mount Fuji is located near the Pacific coast, southwest of Tokyo. It is located in the contact zone of the Eurasian Plate, the Pacific Plate and the Philippine Plate and it is part of the Pacific Ring of Fire. It is considered an active volcano with low eruption risk. Its last known eruption took place in 1707. In this eruption a second summit with a crater was created about halfway up the southeastern flank of the mountain. Today, the circular summit crater has a diameter of about 780 m (at the upper rim) and a depth of 240 m. In summer, about 3,000 tourists reach the summit every day, climbing the volcano on four different hiking routes.

Four small towns are located at the foot of Mount Fuji and on the northern rim, the five Fuji lakes (not all pictured) are located. The yellowish or reddish stripe patterns, that can be seen in the satellite image, represent golf courses. These are numerous around Mount Fuji. The linear structures in the lower right part of the image are forest aisles for power lines. At the left edge of the image, the terrain changes to mountainous terrain.