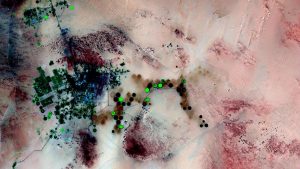 Our satellite image of the month November shows the Kufra oases in southeastern Libya.

The image is based on Sentinel-2 data from the EU Copernicus program. After downloading the freely available multispectral satellite image, the scene was atmospherically corrected with free software and a color composition was calculated with the three bands 11 (shortwave infrared), 8A (visible and near infrared) and 4 (visible red). This is also called a false color composition because the image appears in colors that do not resemble the natural perception by the human eye. With this band combination, healthy vegetation appears in bright shades of green and can be easily distinguished from soil (reddish). Urban areas can be identified in dark shades of blue.

The Kufra Oases are a group of oases in southeastern Libya about 160 kilometers west of the border with Egypt. The center of the oases is the city of al-Jawf with a population of about 40,000, which is also the only major settlement in the desert municipality of al-Kufra.

In the course of oil drilling under the desert floor in the 1970s, several billion cubic meters of groundwater were discovered, which the Libyan ruler at the time, Muammar al-Gaddafi, saw as an opportunity to advance the country’s economic independence. As part of this, the enormous water resources were to be used for agricultural purposes, so wells were drilled and huge circular fields were laid out. Water was pumped to the surface in the center of these circles, and automatically irrigated crop circles with a radius of 1120 meters with the help of rotating sprinkler systems. In the satellite image, both current crop circles with strong vegetation and those with weak to no vegetation can be seen, as well as former and harvested crop circles (brownish).
Thanks to the successful agricultural use of the site, the small desert village of al-Jawf (center-left in the picture) experienced a rapid increase in population and prosperity, which led not least to the construction of its own airport (visible on the right side of the urban area of al-Jawf). Today, the oases are an important stopover for refugees from neighboring countries such as Chad. Tens of thousands of refugees flock here every year on their way to Europe.

However, the future of the oases is uncertain. The pressure that once existed under the reservoir at the time of its discovery diminished after only a few years, and it became increasingly difficult to extract the water. In addition, the groundwater level decreased rapidly: already in the first year of cultivation, it dropped by 15 meters. There were quick adjustments in the irrigation project. Nevertheless, the groundwater reservoir continues to be pumped dry, and since it is a fossil water source, the reservoir will eventually run dry. For several years now, there have been no official figures on the groundwater level. The assumption is that the best times of the Kufra oases are in the past and that it is necessary to drill deeper and deeper in order to tap new groundwater layers and to keep the oases alive. How long this can be implemented is questionable. Because of the effort involved, the wheat produced in the oasis already costs many times the world market price.