While working on a project to process and upload raster data to GeoServer, several challenges occurred. One task was to manipulate the color table of raster files for own usage.

GDAL offers a convenient utility to change the look of raster files using color tables. The utility gdaldem color-relief is normally used to colorize a height ramp of a digital elevation model, but can also be used to generally change the appearance of the raster files:

To manipulate an already existing color table, we first needed to extract this information. The command gdalinfo can be used in Bash to show the metadata of a raster file, but it is not possible to extract the color table in a convenient way.

With the GDAL Python utilities one can however use a series of functions to extract this information and save it to a text-file. GetRasterBand(1) retrieves the information of the first band and band.GetRasterColorTable() extracts for you the color table saved along with it. The first band of the raster files be for example of the type Palette and owns an 8-bit color table with 8*8=256 different entries. The function GetColorEnrty() then can read each of the 256 RGB-codes. So we just need to create a new text file and copy the entry-number (i) and the corresponding R-, G-, B-code (sEntry) from it:

This text-file which has been created above contains 256 RGB-entries and looks as follows for our example:

Shell
Here the value zero (0) refers to white, the first entry corresponds to the color mint green and the second color is called cream. A useful webpage to translate these rgb-codes to verbal color names can be found here.

The program sed is a useful tool in Bash to change the color table. With it one can manipulate strings and also text files. To manipulate the colors in the raster file you have to write down the string you want to replace; here as a comma separated RGB-code. A colon “:” is used in this example to distinguish it from the new code. So if you just want to change the color white to black, write down 255,255,255:000,000,000 like in the example below:

In a final step, we use gdaldem to manipulate the raster file with the help of our newly created rgb_color.txt and save it as a virtual dataset or as a GeoTiff:

The script can be found on GitHub and is available for public usage. 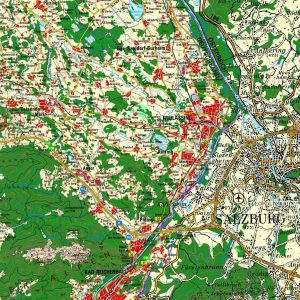 One thought on “Extract and manipulate raster color tables with GDAL”