Grand Canyon – USA, recorded by the Sentinel-2B satellite on September 24, 2020 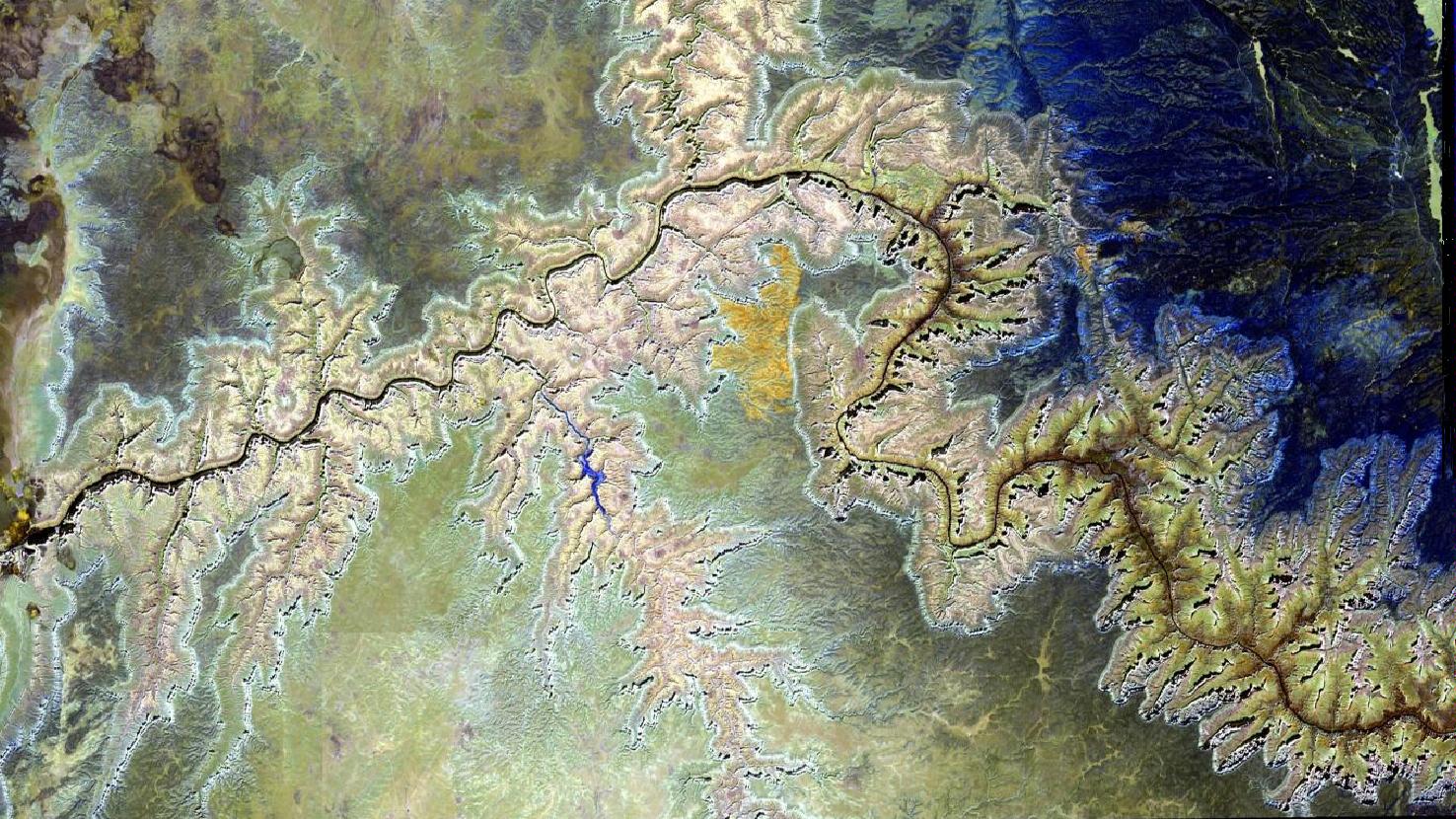 The satellite image of the month april shows a section of the Grand Canyon in Arizona, USA.

The image is based on Sentinel-2 data from the EU Copernicus programme. Sentinel-2 data are freely available, multispectral satellite images. After downloading the scene, an atmospheric correction was carried out with free software and a colour composite was calculated with three different bands.
For this false colour composite, bands 12, 11 and 8A were used, which provide a spatial resolution of 20 m. The bands 12 and 11 both sense in the shortwave infrared range while band 8A covers the the visible and near infrared spectrum. The presence of short-wave infrared sensors allows this composition to penetrate the atmosphere relatively well. This lets the image appear much crisper. Water appears black and vegetation is painted in various shades of blue.

The Grand Canyon is a steep-sided, approx. 450 km long canyon carved by the Colorado River. It stretches from northeast to west in the north of the US state of Arizona and has been a World Heritage Site in the United States since 1979. About 350 km of the canyon are contained within the Grand Canyon National Park. The Grand Canyon is visited by more than 6 million tourists per year. The main tourist spots are located on the southern side of the canyon. The tourist centre Grand Canyon Village and some of the viewpoints in the surrounding are in the picture at the bottom right.

The canyon was formed over millions of years by the Colorado River cutting into the Colorado Plateau. Today the canyon is between 6 and 30 km wide and up to 1800 m deep. At the South Rim, the plateau exists at an average altitude of 2100 m. The scarcely populated North Rim, however, lies about 300 m higher, while the river itself flows at 750 m above sea level on average.

The Colorado River is about 100 m wide. It is clearly visible in the picture as a dark blue to black serpentine line. Adjacent to it, the side walls of the canyon can be seen in light yellow to light red. In some places the tributaries and secondary valleys make it look like a vein network. The change in colours from the outside to the inside of this area are caused by the many different rock layers, that have been exposed in the carving process.

In the top right corner of the image, the beginning of the Kaibab Plateau with the Kaibab National Forest can be seen. The forest is pictured in different shades of blue. The dark yellow area in the central region of the image indicates a change in vegetation, that might be due to e.g. fire, clearing, pest infestation or similar.
A little more to the left, the valley of the Havasu Creek appears. The Havasu comes from the bottom of the image and flows into the Colorado River. The valley is part of the Havasupai Native American Reservation. Its capital Supai is a small village located in the blue painted part of the valley (meaning there is also some more vegetation there). As it is located 13 km from the nearest road, the village is accessible only on foot, by mule or by helicopter. It is the only place in the United States where mail is still carried out by mules.