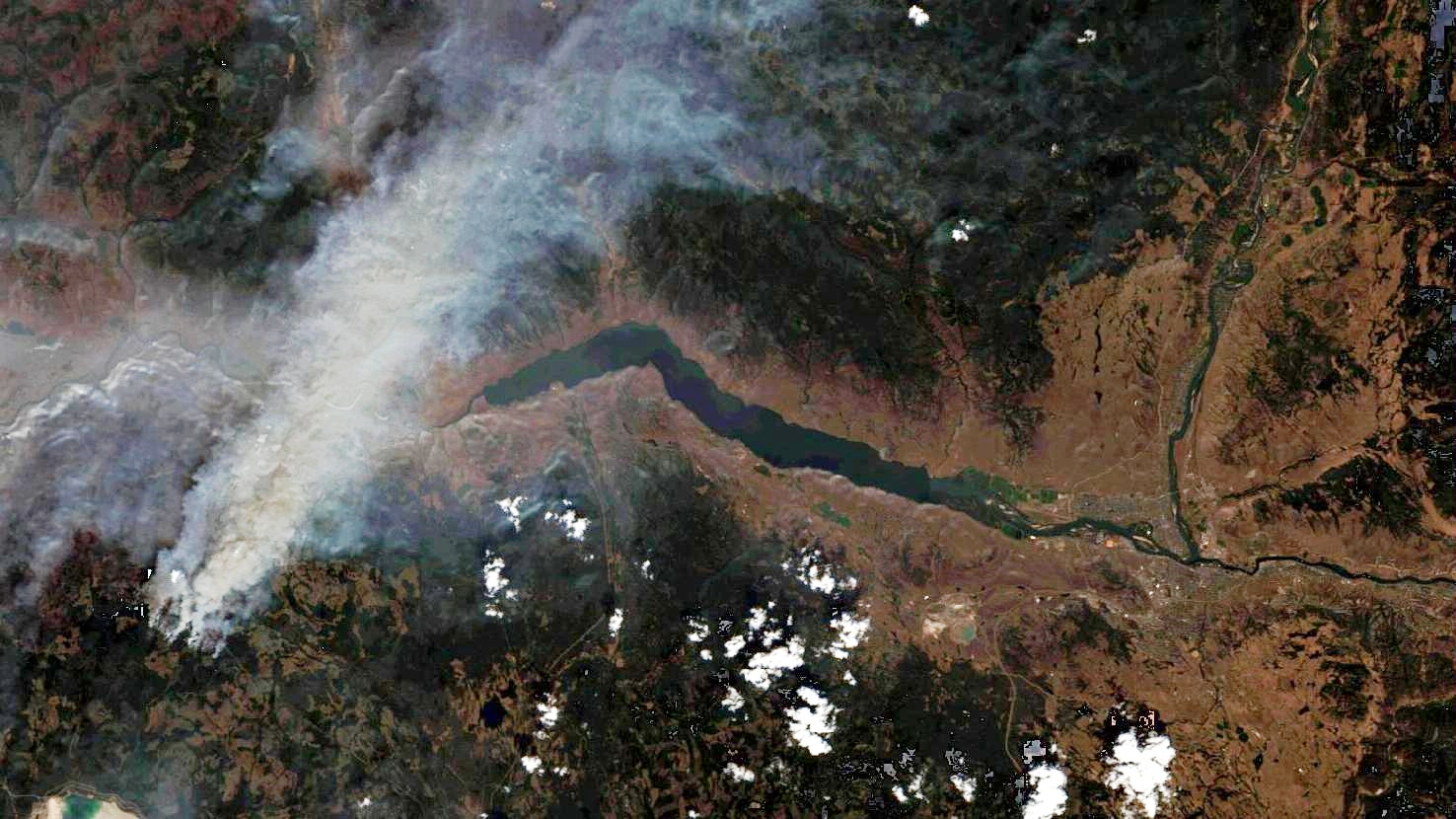 The satellite image of the month August shows the city of Kamloops in British Columbia in Canada.

The image shows a composite of three different spectral bands based on freely available Sentinel-2 data from the Copernicus programme. After downloading the scene, an atmospheric correction was carried out using free software and a color composite was calculated. For the “natural color” composite shown here, bands 4 (red), 3 (green) and 2 (blue) with spatial resolutions of 10 m were used. Because the three visible bands are used, the image appears in colors which correspond to the common perception of the human eye. Vegetation appears in green, water in shades of blue, soil is yellowish brown, roads and buildings appear gray, and clouds are white.

British Columbia is the westernmost province of Canada. It is located between the Pacific Ocean and the Rocky Mountains and has about 5.1 million inhabitants. Here alone, more than 200 forest fires were counted in July 2021. This is mainly due to the intense heat. Due to a special weather constellation in which high pressure in the atmosphere keeps the hot air in the region and creates heat domes, there was an extreme heat wave in large parts of western Canada, but also in the western United States. In British Columbia, a region that normally experiences moderate temperatures, record temperatures of up to 49.6 degrees Celsius were recorded.

Most of the fires were caused by lightning strikes. Because of persistent drought, high temperatures and strong winds the wildfires spread rapidly. In Canada, the region around the city of Kamloops (in the right half of the picture), about 350 km northeast of Vancouver, was particularly affected. The small village of Lytton, for example, was almost completely destroyed. Both in Canada and in the US, several thousand people had to leave their homes in the danger zone.

In many places so-called ‘fire clouds’ (pyrocumulus or pyrocumulonimbus) have been produced by the massive wildfires. These particularly high clouds, which contain a lot of soot, are dangerous. On the one hand, they bring extremely hot air close to the ground, which heats up and accelerates the fires. On the other hand, they can cause severe thunderstorms, where lightning can start new fires. In addition, firefighting efforts from the air are hampered by the massive clouds.

The fires and ash clouds are so large that they can easily be spotted on satellite images, as is the case here. For size comparison: the city of Kamloops on the right of the image has about 90,000 inhabitants, and the Kamloops Lake in the center of the image is about 52 square kilometers in size.
The smoke and ash clouds even travelled to the east coast of the continent, 4,000 kilometers away. In cities like New York and Philadelphia, the ash could be seen as a dark haze against the sun, and authorities warned of poor air quality.