Bethlehem and Jerusalem – West Bank and Israel, recorded by the Sentinel-2A satellite on November 16, 2021 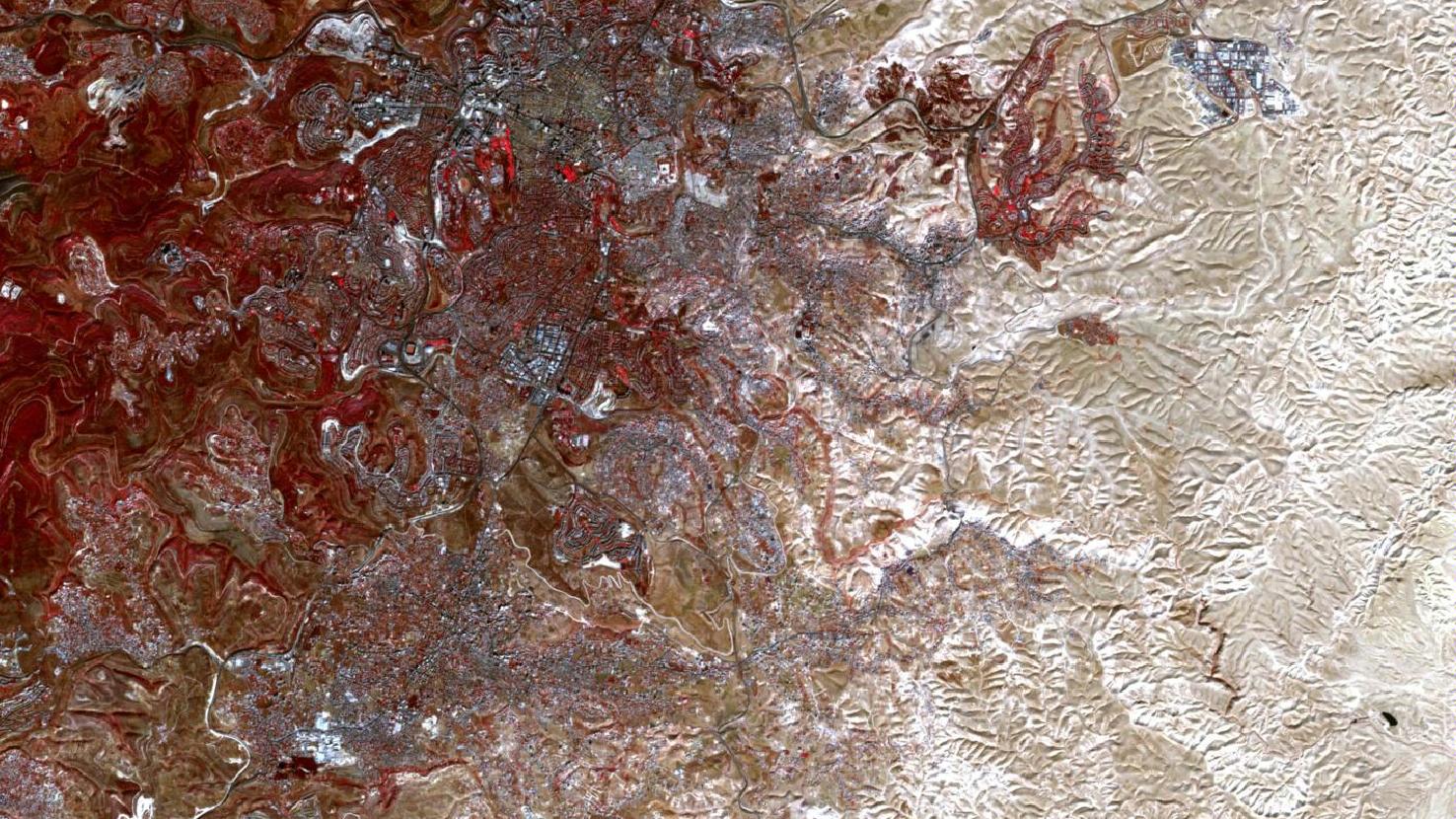 The satellite image of the month of December shows the region around Jerusalem and Bethlehem in the West Bank and Israel.

The image is based on Sentinel-2 data from the EU Copernicus programme. The freely available multispectral satellite image was downloaded and atmospherically corrected using free software. Then, a color composite was calculated from bands 8 (near infrared), 4 (red) and 3 (green). The chosen color infrared composite is particularly well suited for visualizing vegetation. Vegetation appears in different shades of red, older vegetation in green. Soil is shown in shades of brown and green and urban regions in blue-grey.

The two cities of Bethlehem and Jerusalem are located in the foothills of the Judean Mountains. They lie, only about 10 km apart, at an altitude of about 770 m above sea level and are mostly surrounded by valleys and dry riverbeds, so-called wadis. To the west of the region there are forested hills. The vegetation appears in a dark red color. To the east, the area turns into a barren landscape and slopes down to the Dead Sea, which is located 430 m below mean sea level.

Of the two cities, Jerusalem is the larger one in the north. Bethlehem can be seen at the bottom left of the satellite image. To the northeast of the city, the Israeli West Bank barrier, a 759 km long barrier along the border line between Israel and the West Bank, can be seen. At first glance, it looks like a winding road, but it is an 8-meter high wall with adjacent patrol roads. The barrier is part of the ongoing Israeli-Palestinian conflict. Both Israelis and Palestinians claim Jerusalem as their capital.

In Christianity, Bethlehem is known from the Bible as the birthplace of Jesus. According to the Bible, Jerusalem also played an important role in the life of Jesus. In addition to the Christian faith, Jerusalem is also a holy city in Judaism and Islam. Despite efforts to retain peaceful religious coexistence, some sites, such as the Temple Mount, are a constant source of tension and controversy.
The Temple Mount is located in the Old City of Jerusalem. At its summit an artificial plateau has been built. On the plaza are located the Dome of the Rock, Islam’s oldest monumental sacred building, and a mosque. The Dome of the Rock can even be detected in the picture by its round shape and the surrounding plaza. It is located in the upper third part, close to the center of the image and can be seen as a dark circle on a light rectangle.

West of the Temple Mount, some bright red, partly elongated spots are striking. The red coloring indicates vegetation growth. These red spots are various parks and the lawn of a stadium.
Also the industrial and commercial areas, are visible in the image. They stand out from the rest of the city as lighter patches with linear, chequered patterns. Examples can be found in southern Jerusalem (central left in the image), in southwestern Bethlehem (in the lower left of the image) and outside the range of the cities in the upper right corner of the image.