Öresund – Strait between Denmark and Sweden, recorded by the Sentinel-2A satellite on May 27, 2017 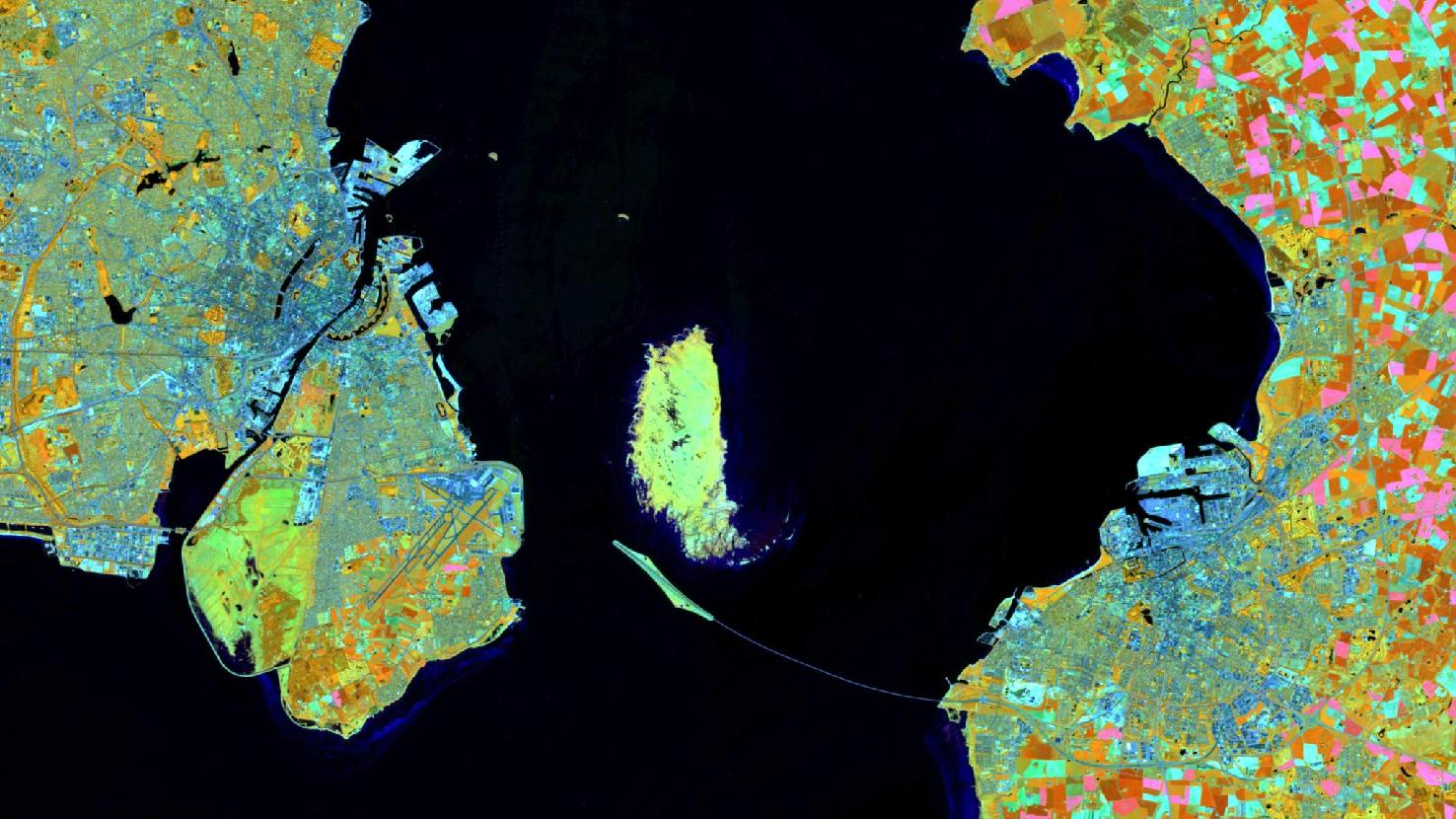 The satellite image of the month February shows the southern part of the Öresund, the strait between Denmark and Sweden. It separates the Danish island Zealand in the west and the Swedish province of Scania in the east, and connects the Baltic Sea to the south with the Kattegat (sea area between Jutland in Denmark and the Swedish west coast) to the north.

The image is based on Sentinel-2 data from the Copernicus program and shows a land-water-composition. Sentinel-2 data are freely available multispectral satellite images. After downloading the scene, an atmospheric correction was carried out with free software and a color composite was calculated using three different spectral bands.
The False color composite, based on the three bands visible and near infrared, short-wave infrared and visible red, is useful for discriminating land and water. Healthy vegetation appears in orange and older vegetation in green, soil and clouds also appear in different shades of green. Water, on the other hand, is shown in shades of blue and purple. The use of the above mentioned bands allows a spatial resolution of the image of 20 m.

The upper part on the left side of the image shows a large part of the urban area of Copenhagen. On the right half of the image, the third largest Swedish city, Malmö, can be seen. The two cities are the largest cities in the Öresund region and have a distance of about 28 km as the crow flies.
Since the year 2000, they are connected by the Öresund Bridge in addition to ferry connections. The bridge runs in the south of the offshore island Saltholm and is easily detectable in the satellite picture. It has a total length of 7845 m and is the world’s longest cable-stayed bridge for combined road and rail traffic. On the western side, the bridge is connected to the Danish island of Zealand via the artificial island of Peberholm and a tunnel. The tunnel was necessary due to the proximity to Copenhagen Airport in order to avoid interfering in air traffic. The airport in the south of Copenhagen is well perceptible in the picture, especially with the runways depicted in blue.

In the city center, the jagged and star-shaped contours are prominent. These are ramparts around the Copenhagen fort, near which the famous figure of the Little Mermaid is located, and of the city’s former fortification ring from the 17th century. Today, the preserved parts of the fortifications are used as green areas and are popular leisure destinations. A large part also belongs to the Freetown Christiania, which is located right in the middle of Copenhagen.