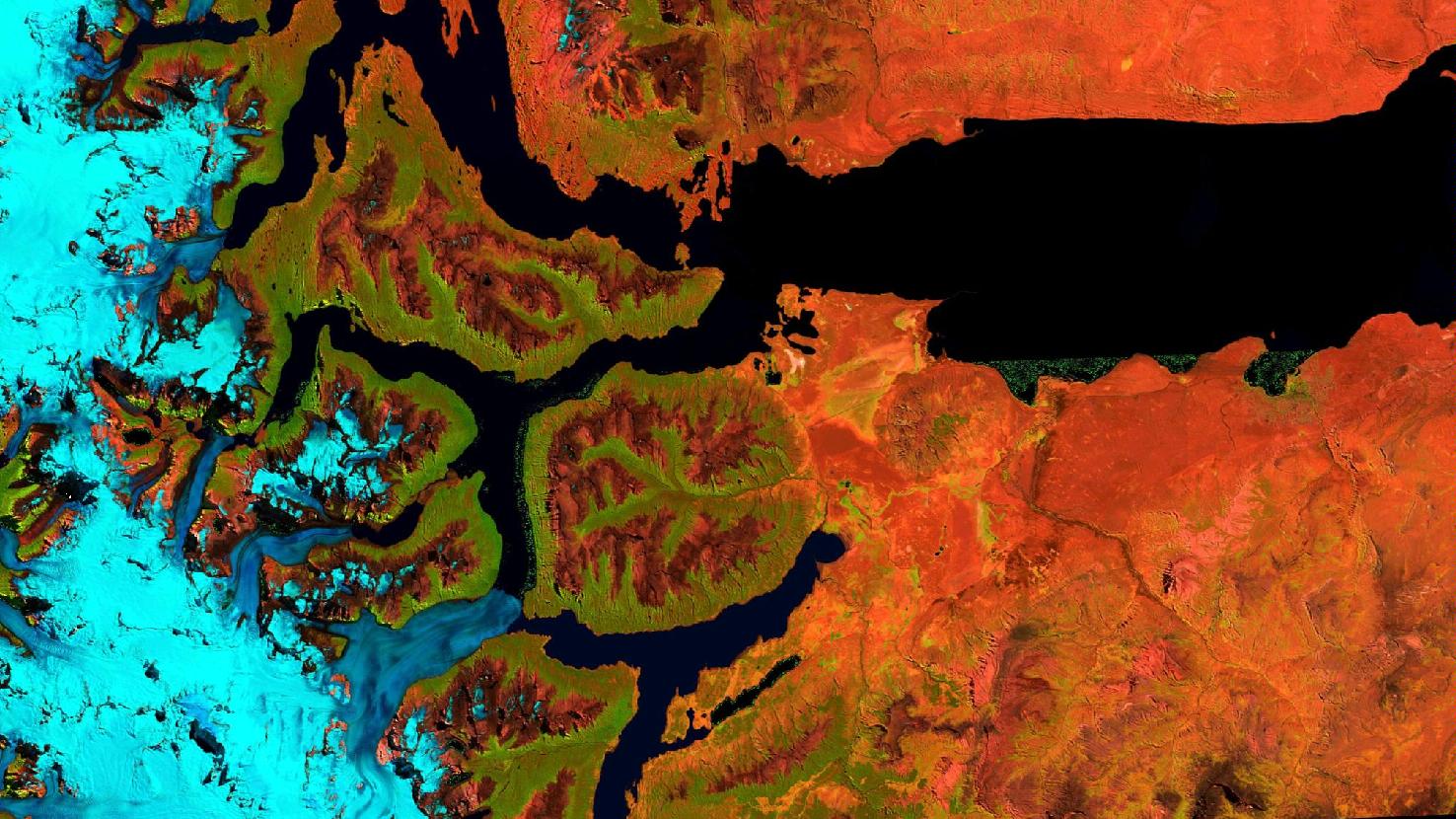 Our satellite image of the month July shows the southern part of the Argentinian Los Glaciares National Park (spanish: The Glaciers National Park).

The image is a composite of three different bands and was taken by the European satellite Sentinel 2A. After atmospheric correction with freely available software, the Vegetation Analysis Composite was computed from the three bands shortwave infrared, visible and near-infrared, and visible red. Healthy vegetation appears in vibrant shades of green and is very easy to distinguish from soil and rock, which is colored in a spectrum from red to brown. Clouds appear in white, water is painted in dark blue to black, while ice appears in vibrant blue.

Los Glaciares National Park is located in the Argentinian part of Patagonia in the province of Santa Cruz and bordering Chile. It covers an area of about 4,460 km² and was added to the UNESCO World Heritage Sites in 1981. The National Park is of exceptional beauty comprising high peaks, numerous glacial lakes and glaciers as well as the Patagonian Ice Sheet.

On the right side of the picture the “Lago Argentino” is depicted. This glacier-fed lake is about three times the size of Lake Constance and the largest lake in Argentina. At its western side the lake is divided into various branches and reaches right into the Andes, where several outlet glaciers of the Southern Ice Sheet (spanish: Campo de Hielo Sur) flow into the lake. In the satellite image, the ice field and the glaciers are coloured in bright blue.

One of the largest and best-known outlet glaciers in the national park is the Perito Moreno Glacier, in the image the southernmost of the blue bands. The glacier tongue flowing into Lago Argentino is about 5 km wide and rises about 55 – 77 m above the surface of the lake. The glacier calves regularly, i.e. huge icebergs breaking off the front and into the lake. Because of its location opposite the Magellan Peninsula, in some years the glacier tongue divides the southern arm of Lago Argentino and dams it up. When the water pressure becomes too high, the glacier tongue bursts in a wild spectacle (most recently in March 2018). Unlike the other glaciers in the region, the Perito Moreno Glacier is not retreating. Its mass balance shows no clear trend.

The Perito Moreno Glacier is one of Argentina’s biggest tourist attractions and the most visited site in the national park. A popular starting point for tours through the national park and to the glacier is El Calafate, the next biggest town in the region. It is located at a distance of about 80 km on the southern shore of Lago Argentino. In the picture it can be seen faintly as a green-brownish spot southeast of the round bay at the right edge of the picture.