Prague – Czech Republic, recorded by the Sentinel-2A satellite on March 09, 2022 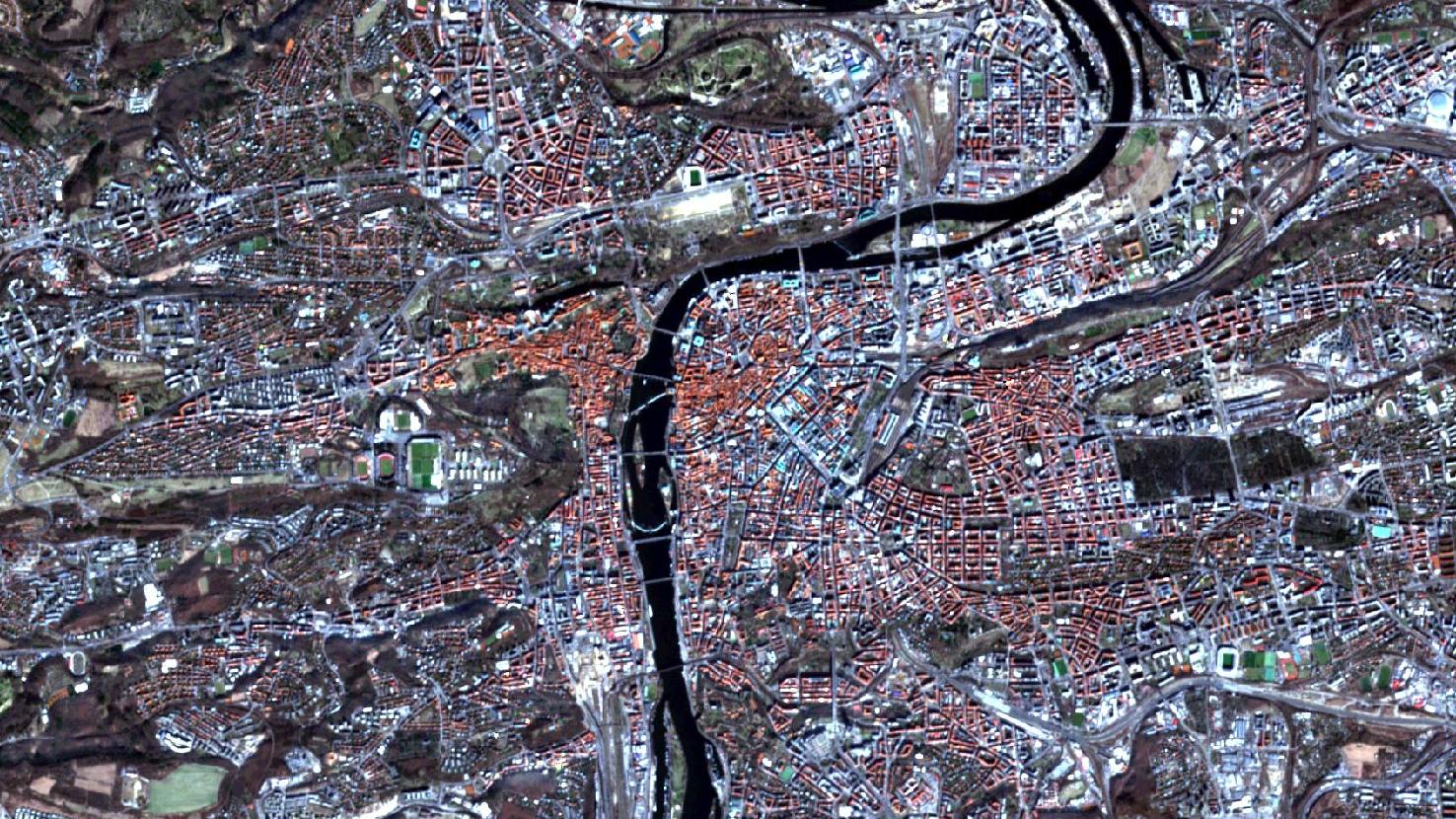 The satellite image of the month June shows the city of Prague (Czech Republic), which is the venue of the OpenDataScience Europe Workshop 2022 “Connecting Europe through Earth Observation and Open Data Missions”.

The image shown is based on multispectral satellite data from the Sentinel-2 satellite of the EU Copernicus program. These data are available free of charge. After downloading, the data was atmospherically corrected and a natural color composite (bands 4, 3, 2) was calculated using free software.
This “natural color” combination looks as similar to “real color” as is possible with Sentinel-2 data. The three bands of visible light that we see as red, green and blue are used here, so the image appears in colors similar to what we perceive with our eyes. Vegetation is green, recently harvested fields are very bright, soil is yellowish brown, and roads and buildings appear gray or red (depending on the roof). Clouds and snow appear white and are hard to distinguish. Different types of vegetation are also difficult to distinguish as well as shallow water and soil. Sometimes this band combination appears hazy because these three wavelength ranges cannot penetrate the atmosphere well. The three bands allow a spatial resolution of 10 m.

With a population of 1.3 million, Prague is the most populous city in the Czech Republic and also the capital of the Eastern European country. In the Holy Roman Empire, Prague was an important royal and imperial residence city. In 1348, the first university in Central Europe, the Charles University, was founded in Prague. In addition to this academic importance, Prague also hosted Czech, German and Jewish culture for centuries.

Prague is one of the 25 most visited cities in Europe, especially because of its historic center, which is a UNESCO World Heritage Site since 1992. The Gothic and Baroque influenced cityscape, including the Charles Bridge, the Prague Castle and the oldest active synagogue in the world, attract almost nine million tourists to the Czech capital every year. The Charles Bridge can be seen in the center of the picture and stretches between the two parts of the old town, which appear in reddish brown, to the east and west of the Vltava River (directly north of the sloping weir). Not far away is Prague Castle (visible in red with very bright areas) between the western part of the Old Town and the green area with trees (dark green to black) to the north of it.

From the northern country border to Prague it is about 110 kilometers and to the south and west the distance from the city to the border is about 170 kilometers. Thus, Prague is located very centrally in the western part of the Czech Republic. Most of the city is located in the wide valley of the Vltava River, which runs in the form of a large loop in the northern part, with the Old Town located on the southern bend of this loop. Due to the city’s location, both the Atlantic maritime and continental climates influence the prevailing climate. This results in a mild climate with an annual mean temperature of about 8°C and a temperature range from -17°C in winter (2006) to 35°C in summer. In the summer the precipitation is much higher than in the winter.

From June 13 – 16, 2022, the OpenDataScience Europe Workshop 2022 “Connecting Europe through Earth Observation and Open Data Missions” will take place in Prague. It will be hosted by the Technical University of Prague, which will also provide the premises in the Faculty of Civil Engineering. The thematic focus will be on dynamic land cover mapping, spatiotemporal machine learning, processing of large raster datasets with high performance and distributed computing and much more. Among others, the company mundialis will also be present with contributions. Detailed information can be found at https://opendatascience.eu/.