Lake Zürich – Switzerland, recorded by the Sentinel-2A satellite on August 23, 2016 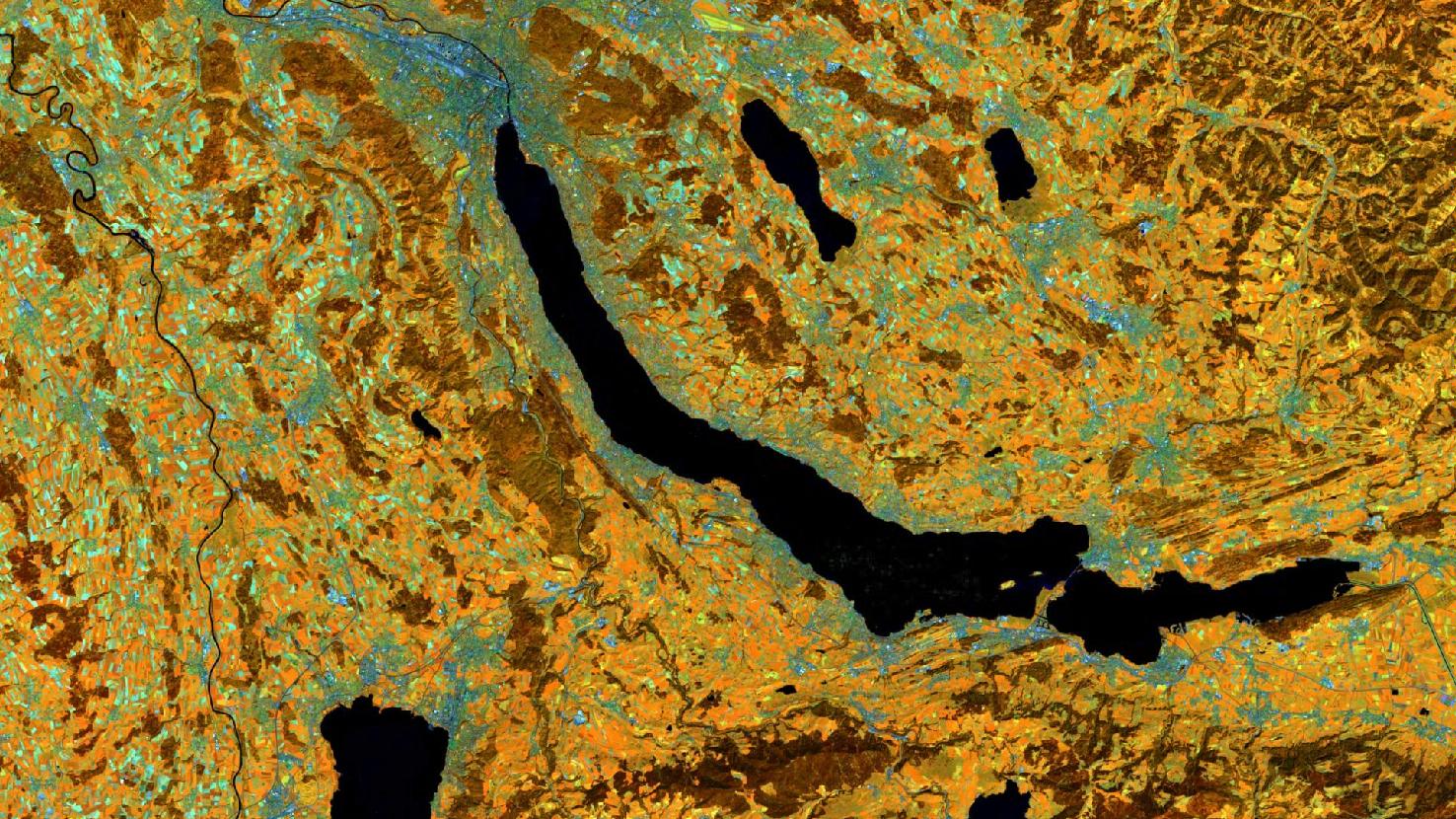 The satellite image of the month June shows Lake Zürich and its surroundings in Switzerland.

The image is based on freely available multispectral satellite images from the Sentinel-2 satellite of the Copernicus Programme. After downloading the scene an atmospheric correction was carried out using free software. Then a color composite was calculated with three different spectral bands. Bands 8A (visible and near infrared), 11 (shortwave infrared), and 4 (visible red) were used which provide a spatial resolution of 20 meters. This band combination is a false color composite useful for discriminating land and water. Healthy vegetation appears in orange and older vegetation in green. Soil and clouds also appear in various shades of green. Water is shown in shades of blue and purple.

Lake Zürich is the largest of the lakes visible in the image and is located in the cantons of Zürich, St. Gallen and Schwyz. It is named after its location southeast of the city of Zürich, which can be seen in the image in shades of blue and green at the northeastern tip of the lake at the top of the image. With about 420,000 inhabitants, Zürich is the largest city in Switzerland.

Lake Zürich is one of many mountain lakes at the edge of the Alps. Due to its location in a narrow valley it has an elongated, slightly curved shape. In its present form, the lake was created after the last ice age, when the melt water of the glaciers was dammed by the terminal moraine. On the sides, the lake is flanked by ridges and hills. On the valley slopes many slope terraces can be found that have been formed by lateral moraines.

Between the towns of Rapperswil (on the northern shore) and Pfäffikon SZ (on the southern shore), the Hurden peninsula and an artificial dam divide the lake into the smaller Obersee (Upper Lake) and the larger Untersee (Lower Lake), which forms the actual Lake Zürich. The peninsula was formed by a glacial moraine. In front of it, the two islands Ufenau and Lütelau are located. From Zürich to Rapperswil, the lake has a length of about 28 kilometers. Together with the Obersee it is even 42 kilometers long. At its widest point, the lake has a width of about 3.85 kilometers. Its total shore length is 87.6 kilometers.

The town of Rapperswil, located opposite of the Hurden peninsula, is the organizer of this year’s FOSSGIS conference from June 06 – 09, 2021. FOSSGIS is the leading conference in the D-A-CH region for Free and Open Source Software for geoinformation systems as well as for the topics of Open Data and OpenStreetMap. Due to the current pandemic situation, this year FOSSGIS will be held exclusively as an online event. Mundialis is delighted to be represented at this year’s conference again with various exciting contributions.

The complete programme of the FOSSGIS 2021 (German only) can be viewed here.