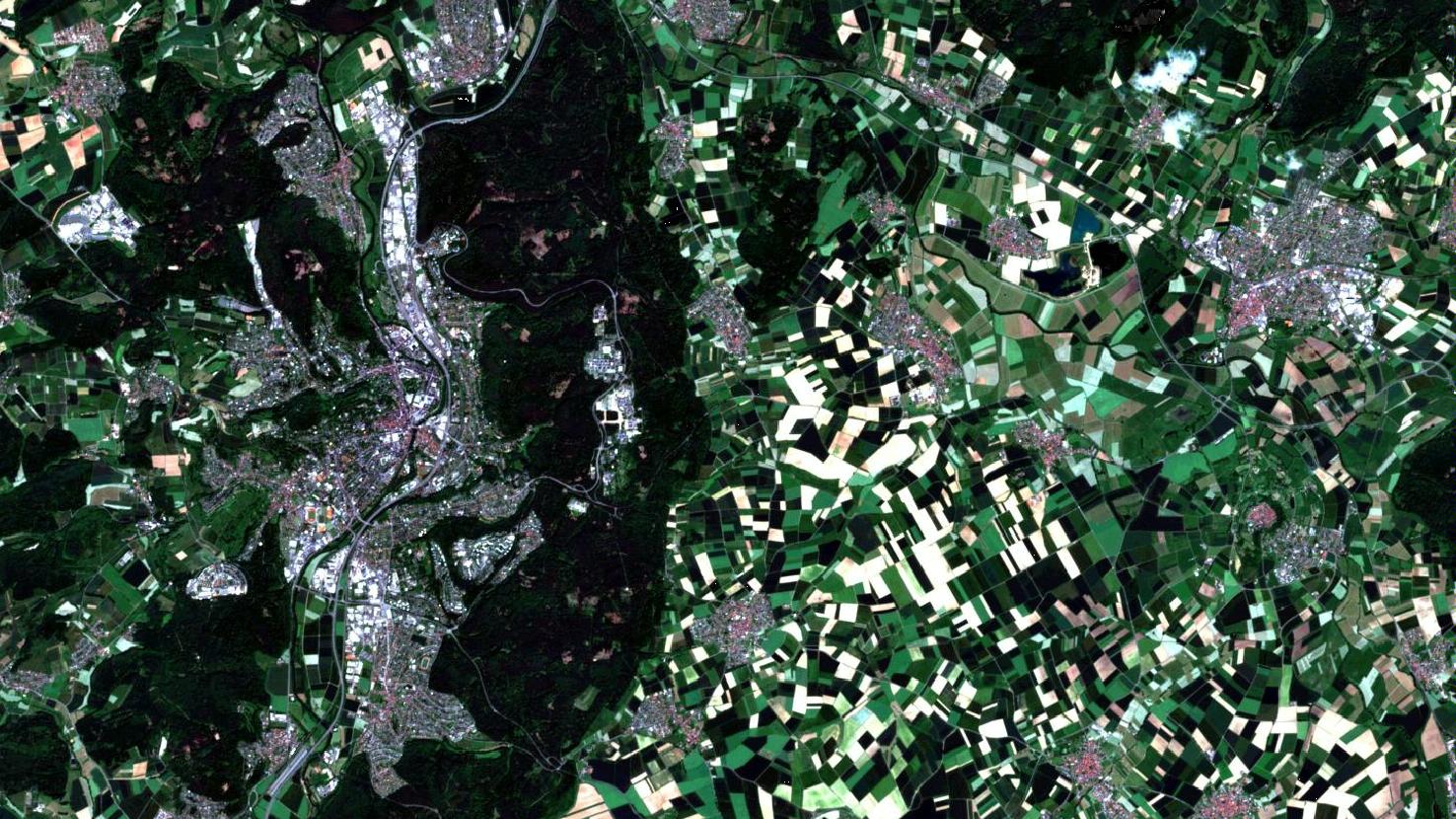 The satellite image of the month March shows the city of Marburg, location of the FOSSGIS conference 2022, in central Germany.

The image shows a composite of three different spectral bands based on freely available Sentinel-2 data from the Copernicus programme. After downloading the scene, an atmospheric correction was carried out using free software and a color composite was calculated. For the “natural color” composite shown here, bands 4 (red), 3 (green) and 2 (blue) with spatial resolutions of 10 meter were used. Because the three visible bands are used, the image appears in colors which correspond to the common perception of the human eye: Vegetation appears in green, water in shades of blue, soil is yellowish brown, roads and buildings appear gray or reddish, and clouds are white.

The city of Marburg (in the left half of the image) is located in the German federal state of Hesse, roughly halfway between the cities Frankfurt am Main in the south and Kassel in the northeast. Having about 76,400 inhabitants, it is the eighth largest city in Hesse. The city extends in the narrow Lahn valley on both sides of the river. The Lahn River flows from north to south and is visible as a dark blue serpentine line through the city. The settlement area of Marburg reaches a maximum extension of about 9 km in north-south direction and a maximum of 4 – 4.5 km in east-west direction.

To the west, the Lahn valley is bordered by the Marburg Ridge (up to approx. 370 m above sea level). Parts of the old town and other districts are located on its hillsides. The old town, called Oberstadt, is located on the western bank of the Lahn River. In the picture it is visible as a reddish spot in the center of the town.
To the east, the Lahn valley is bordered by the Lahn Mountains (up to approx. 380 m above sea level). The Lahn Mountains are forested and can be seen very well as a broad dark green band in the left center of the image, to the right of the city. Within the Lahn Mountains are located (from north to south) the University Hospital, various institutes and the Botanical Garden of Marburg, in the image shown as bright white spots amidst the greenery.

Like many settlements, Marburg developed at the crossroads of two important early medieval highways: the trade route between Cologne and Prague and the trade route from the North Sea, across the Alps, to Italy, which crossed the Lahn River here. To protect the settlement and to collect customs, the first castle was built as early as the 9th or 10th century. Today, the Marburg Castle, which once served as the first residence of the Landgraviate of Hesse, sits on the approx. 290 m high Schlossberg to the west of the city, above the old town and the Lahn valley.
In 1527, Landgrave Philipp founded the University of Marburg (Philipps-Universität-Marburg), which dominates the public life of the city to this day. Its facilities are spread throughout the city. The university’s center is located northeast of the old town and below the Marburg Castle near the Lahn River (large white buildings northeast of the oldtown).

Other prominent structures in the image include the former Tannenberg Barracks and the neighboring town of Amöneburg.
The former Tannenberg Barracks can be detected as a semi-circular urban area southwest of Marburg (located in the lower left corner of the image). It was abandoned by the Federal Armed Forces in the 1990s and converted to an industrial park. To the south of it lies Marburg’s municipal forest (visible in dark green).
Approx. 16 km to the east of Marburg, the small town of Amöneburg is located. It lies on the 365 m high mountain Amöneburg, which is formed by a a basalt cone above the Ohm, a left tributary of the Lahn, in the middle of the otherwise flat Amöneburg basin. In the image, the circular structure of the cone with fields and roads on it and the reddish colored city in its center can be seen clearly.

From March 09 – 12, the FOSSGIS conference 2022 will be taking place at the Philipps University of Marburg. FOSSGIS is the leading conference in the D-A-CH region for Free and Open Source Software for geoinformation systems as well as for the topics Open Data and OpenStreetMap. Originally planned as a hybrid event, FOSSGIS will again be held exclusively as an online event this year due to the current pandemic situation. As usual, mundialis will present new developments from the company. More information about the contributions can be found here and here. The complete programme of FOSSGIS 2022 is available here.