Glasgow – United Kingdom of Great Britain and Northern Ireland, recorded by the Sentinel-2B satellite on July 21, 2021 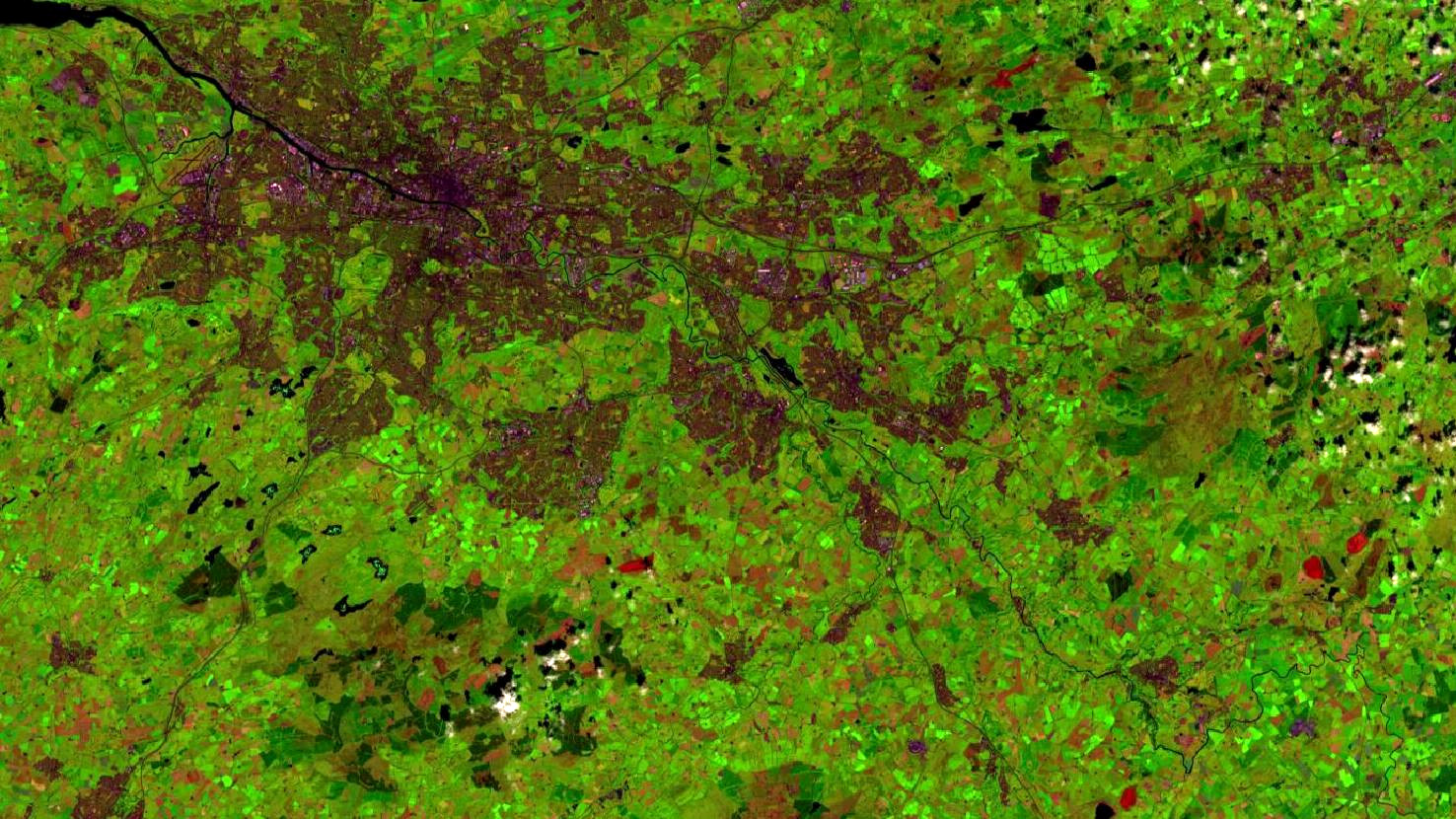 Our satellite image of the month November shows the British city Glasgow, where the 26th UN Climate Change Conference (COP26) will be hosted in the beginning of the month.

The image is based on Sentinel-2 data from the EU Copernicus programme. After downloading the freely available multispectral satellite image, the scene was atmospherically corrected with free software. A colour composite was calculated using the three bands 11 (short-wave infrared), 8A (visible and near infrared) and 4 (visible red). The resulting false colour composite appears in colours that do not resemble the natural perception by the human eye. Healthy vegetation appears in bright green tones and can be easily distinguished from soil, which is shown in brownish-red. Clouds appear in white and water is painted in dark blue to black. Cities are coloured from light grey to light pink. The spatial resolution of the image is 20 metres.

The city of Glasgow, in the upper left half of the image, is the largest city in Scotland. With a population of around 630,000, it is larger than the Scottish capital Edinburgh and the fourth largest city in the United Kingdom after London, Birmingham and Leeds. Geographically, Glasgow is located in the southern half of Scotland, at about the same latitude as Edinburgh, but towards the west coast. The region is part of the West Central Lowlands.

Starting as a small rural settlement on the River Clyde, Glasgow became Scotland’s largest seaport. Especially in the 18th century, the city was one of the most important hubs of Britain’s transatlantic trade. In the picture you can see how the River Clyde (dark blue) winds its way through the city from south-east to north-west. In the upper left corner of the image, the river already becomes significantly wider. However, before flowing into the sea, it bends again to the south.

It is worth noting that in the late 19th and early 20th centuries, over a million people lived in Glasgow. The population of the city had grown strongly with the Industrial Revolution and Glasgow was one of the outstanding centres of the chemical, textile and engineering industries, especially for shipbuilding and ship technology. In the 1960s, the city’s population declined again following extensive urban renewal and resettlement projects. Some of the “new towns” and suburbs to which people were relocated at that time can be seen in the picture as dark patches on the south-eastern edge of the city.

One of the former docks, the Queen’s Dock on the north bank of the Clyde, is now home to the Scottish Event Campus, Scotland’s largest exhibition centre. It is here that the parties of the United Nations Framework Convention on Climate Change (UNFCCC) will meet from 31 October to 12 November 2021 for the COP26 summit to accelerate action towards the goals of the Paris Agreement and the UN Framework Convention on Climate Change.
Moreover, the city is also known as host in the sporting world. In 2021, Glasgow was among the venues for UEFA Euro 2020.