Satellite image of the month – September – Kansas and Colorado (USA)

Kansas and Colorado – USA, recorded by the Sentinel-2A satellite on September 22, 2021 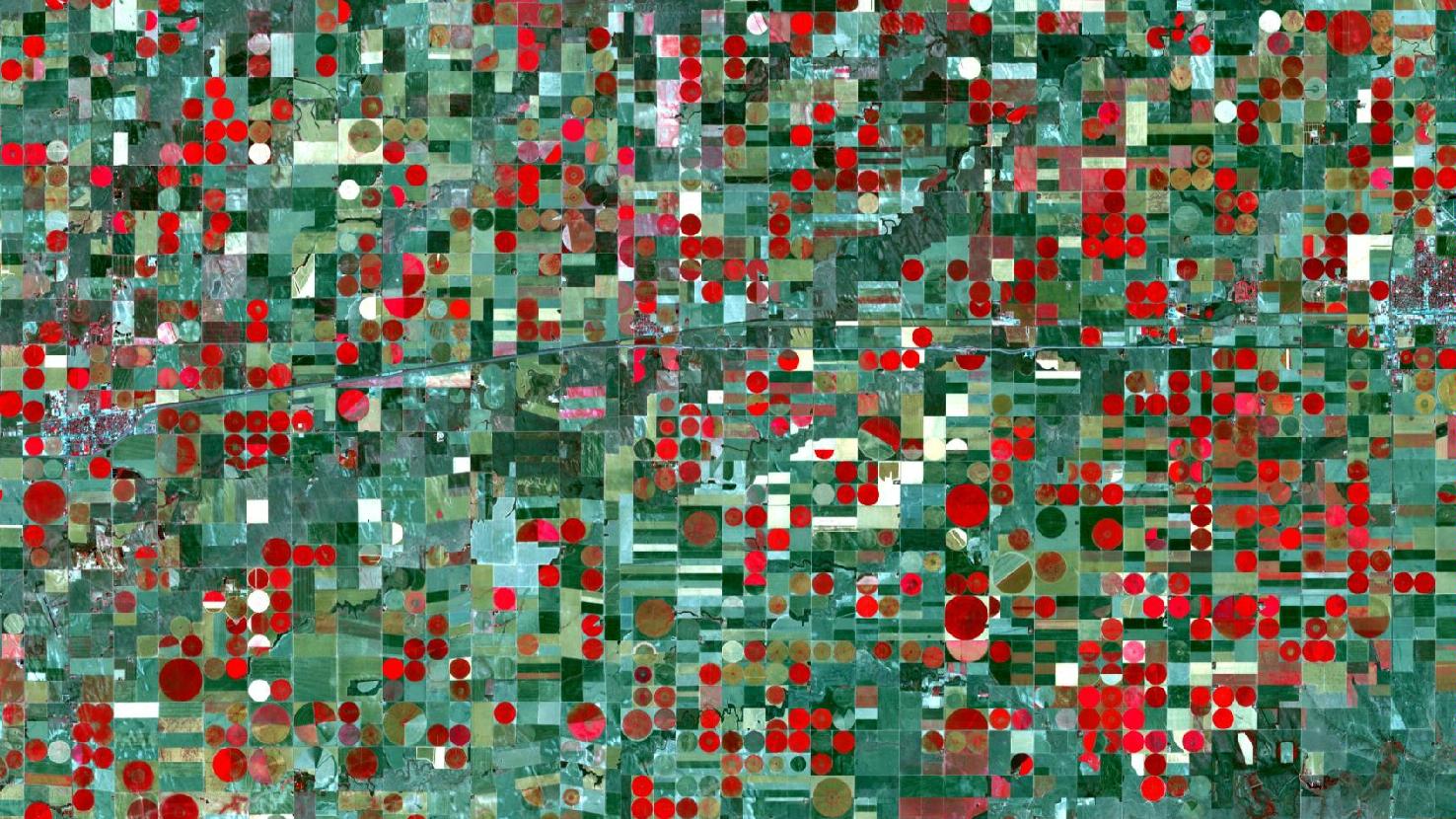 Our satellite image of the month September depicts an agricultural area at the border between Colorado and Kansas, USA.

The image is based on Sentinel-2A data from the EU Copernicus Programme. Sentinel-2 data are freely available multispectral satellite images. After the download, the scene was atmospherically corrected using free software. Then a color composite was calculated by using bands 3 (green), 4 (red) and 8 (near infrared). The resulting color infrared composite is particularly well suited for visualizing vegetation. Vegetation appears in different shades of red. Dense, healthy vegetation is shown in bright red, older and sparser vegetation in brownish to greenish. Soil is depicted in shades of brown and green (light (mint) green to dark green), urban regions in turquoise-blue with small-structured, sometimes reddish pattern.

Horizontally, across the image runs the road Interstate 70 (I-70). It can be seen as a light turquoise or dark very straight line. The I-70 is one of the major east-west routes in the United States, running from Utah to Maryland. In the immediate vicinity of the image, it connects Denver to the west (Colorado) and Kansas City to the east (Kansas). At the right and left edge of the picture, two villages (characteristic small-structured red, turquoise pattern) can be seen adjacent to the Interstate. The village on the left is Burlington (Colorado) and the one on the right is Goodland (Kansas). The border between the two states runs perpendicular, slightly to the left of the center of the image (next to the very small village of Kanorado, which is located also just off I-70).

Geographically, the area pictured is located in the Great Plains of the USA. The Great Plains cover the dry area east of the Rocky Mountains and west of the Mississippi in North America. Much of the flatland is covered with prairie, steppe, and grassland. Having a north-south expansion of about 3,000 km, the Great Plains stretch from Canada to Texas and cover a total area of about 2 million km². They are also known as the „Grain Belt“ or „Breadbasket“ of the U.S. because they are among the most productive agricultural regions in the United States. Overall, about 40% of the world’s corn, soybeans, wheat and other grains is produced in North America.

However, due to insufficient rainfall, intensive agriculture in the arid Midwest of the U.S. is dependent on supplemental water through artificial irrigation. The typically used irrigation form is Central Pivot Irrigation. This method involves a central pivot and long, rotating sprinklers from which water selectively drips onto the plants. A side effect of this method is the characteristic round field shape, which appears in the picture as red or green circles (depending on the vegetation status). The fields have a diameter between 800 and 1600 m, depending on whether they encompass one or four of the square agricultural plots.

The region depends heavily on groundwater, which is pumped to the surface for irrigation of the crops. The water comes from the Ogallala Aquifer (also known as the High Plains aquifer). It is one of the largest natural aquifers on earth. It extends across eight states, covering an area of 450 km² beneath the Great Plains. Because of increasing drought and thus increasing artificial irrigation for agriculture in recent decades, the Ogallala Aquifer is currently losing significantly more water than is generated. Under current use, the aquifer is said to lose about 70 % of its original water volume by 2060. Since it forms the basis for almost all agriculture in the Great Plains, its drying up would have serious consequences for the region.