From June 12th to 30th, the company mundialis exhibits satellite pictures in the foyer of the Stadthaus Bonn

Viewing the earth from space in the form of satellite pictures can be an extraordinary experience. From June 12th onwards, visitors of the Stadthaus Bonn will be able to experience this for themselves. Until the end of the month, the Bonn-based company mundialis presents an excerpt of its work in the city hall of its hometown: satellite pictures of regions from around the world, which, prepared in this way, primarily function as a spectacular kind of wall decoration. Nevertheless, every picture is a depiction of image data that has been processed according to scientific criteria. The data itself is derived from the so-called Sentinel satellites of the European Union, which have only recently started orbiting around the earth.

The analysis and processing of satellite image data for scientific and commercial uses, for example agriculture and forestry, is the main business of the start-up company mundialis. Using this data, one can determine vegetation states, surface temperature, and the water content of the soil, among many other things.

One of the pictures exhibited at Stadthaus Bonn is an infrared false-solor composite showing the border separating the Uri and the Glarus Alps in Switzerland (see illustration). The advantage: plants and trees appear in different shades of red, which indicate their age: fresh vegetation is depicted in loud shades of red, while older plants are depicted in darker or paler shades. In a depiction such as this one, water is painted in dark shades of blue and black, while cities are colored in hues ranging from gray to brown.

The main reason for exhibiting these pictures, however, is their aesthetic quality, which exists apart from their analytical function. Depending on the purpose of inquiry, the processing of the satellite data leads to the emergence of spectacular compositions, in which the earth’s colors and forms turn into veritable abstract art. Pictures like the one showing Bonn and the Seven Mountains, however, have a natural look, which also has its appeal and invites the viewer to see known landscapes in a new light. Especially islands and coastal regions like Sylt or the Cape of Good Hope in South Africa seem to kindle a sense of recognition or even of holiday mood. If you like it more mysterious, maybe the picture of Etosha National Park in Namibia is for you. Seen from space, the landscape of the famous Kalahari Basin almost seems like an abstract painting by Gerhard Richter.

Additional inspiration can be found at art.mundialis.de, also in regard to which picture might be of interest for oneself. Formats, sizes, regions of the earth, image sections and type of processing are freely selectable.

Interested groups have the possibility to see the exhibition under the expert guidance of mundialis staff members. For this, a prior appointment is required. 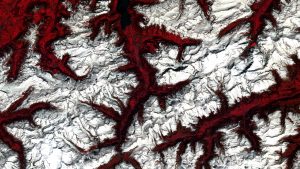