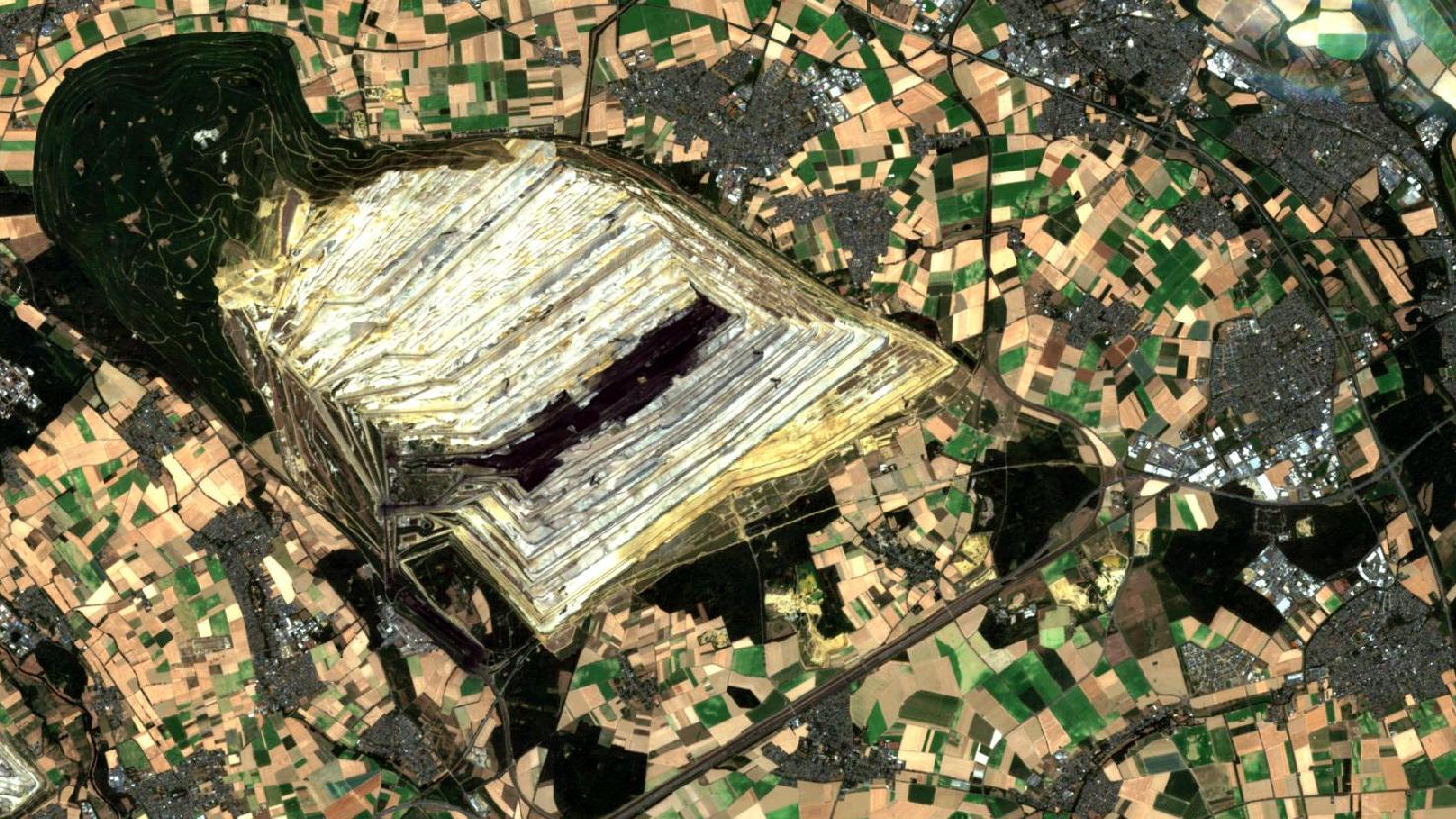 The satellite image of the month October shows the Hambach opencast mine in the middle, the Hambach forest itself bordering to the south and the villages of Elsdorf and Sindorf to the east. The entire region shown in the picture is located in the German state of North Rhine-Westphalia. The image is based on Sentinel-2 data from the Copernicus program. Sentinel-2 data are multispectral satellite images which are freely available. After downloading the scene an atmospheric correction was carried out with free software and a true color composition was calculated using three different spectral bands.

With particularly light colours and a very dark or black stripe in the middle, the pit opening of the Hambach opencast mine can be easily identified in the middle of the picture. This mine produces around 40 million tonnes of lignite per year, making the Hambach opencast mine the largest lignite opencast mine operated by RWE (energy supply group). It is difficult to discern the different layers of earth or steps that have been dug around the mine in the lighter sand-coloured earth to extract the lignite. On the southern side of the open-cast mine is the last part of the Hambach forest located, which did not have to give way for the open-cast mine. The current area of the Hambach forest is 200 hectares, while about 40 years ago it was 4000 hectares.

The Hambach Forest is regarded as a symbol of the anti-coal-fired power movement’s resistance to environmental destruction and climate damage by the coal industry, as well as the imminent phasing out of coal as part of the energy transition. In the last months and years numerous activists and nature conservationists occupied the forest with tree houses in order to stop a planned clearing starting from 14.10.2018. Up to about 100 hectares of forest will be cut down for the open-cast mine Hambach in order to be able to continue producing the brown coal required for the energy supply of the country. After the planned clearing was stopped for the time being by the Higher Administrative Court of Münster and a major demonstration took place in the forest, the state government stopped removing the tree houses.

The forest in the northwest of the picture has been reforested by RWE since the beginning of the deforestation in this area. The so-called Sophienhöhe is a recultivated spoil heap of around 1300 hectares, most of which lies on the site of the original Hambach forest. Nature conservationists and forest educators criticize, however, that the afforested area is not to be equated with the loss of the several centuries old Hambach forest. The Hambach forest is regarded as a forest of high ecological value, which results from relics of warmth-loving species that occur in the old forests.