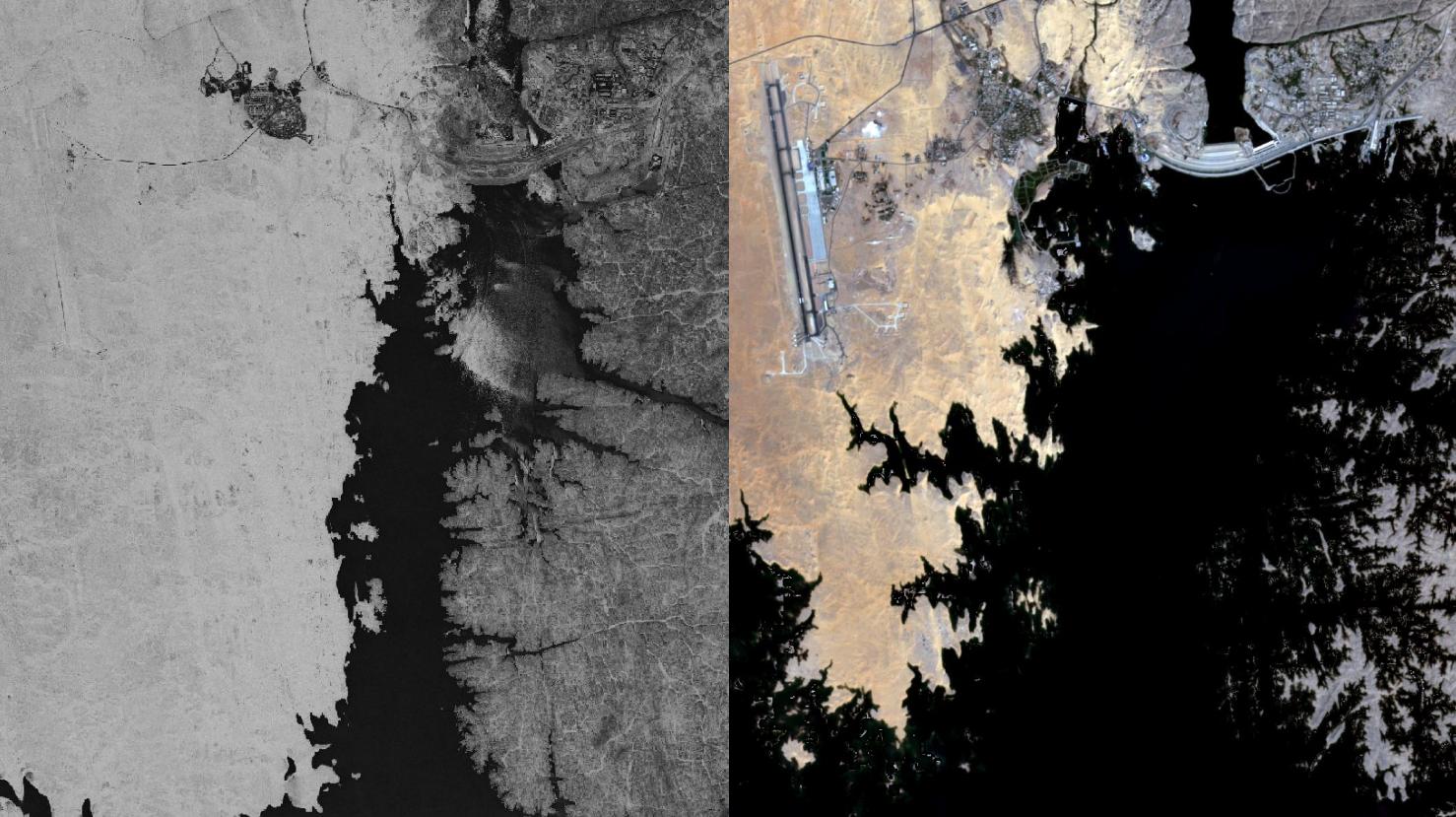 Our satellite image of the month April shows the Aswan Dam in Egypt. The Aswan Dam, also known as the Aswan High Dam, is located in southern Egypt, about 13 kilometers south of the city of Aswan. After its construction, Lake Nasser, which extends until Sudan, was created by the dammed Nile water.

With a total length of about 6,650 km, the Nile is the longest river on earth. It originates in high precipitation areas of Central and East Africa and runs through the desert areas of Egypt until it flows into the Mediterranean Sea after passing Cairo.
The lower Nile Valley is a river oasis that has been intensively farmed for thousands of years, but was characterized by strong seasonal fluctuations in the Nile’s water level. The agricultural system took advantage of the fertile Nile sediments left behind after the Nile floods, and water for the dry season was stored in canals and artificial lakes.

Today, the strong fluctuations in the Nile water level are compensated by the Aswan Dam. The dam was built in the 1960s and completed in 1970. The filling of the huge, 500 km long Nasser reservoir to its intended water level lasted from 1964 to 1976. However, in addition to the positive effects, such as regulating the Nile floods and allowing year-round irrigation downstream, the interruption of the natural water flow rhythm has also led to ecological problems, for example by retaining the nutrient-rich Nile sediments.

The black-and-white satellite image on the left shows the dam and the initially filled reservoir during construction in the year 1968. The image was taken by an U.S. CORONA satellite, a military reconnaissance satellite, and has a spatial resolution of more than 2 m. This high resolution was made possible by the satellites’ low orbit, which was sometimes only as high as 120 km. The satellite images, which were top secret at the time, are publicly available since the 1990s. The satellite images, which were recorded on classic film and later developed in the laboratory, are available in the form of long photographic strips without geographic information. To make better use of them after digitization, mundialis has developed an automated method for georeferencing (spatially locating) and orthorectification of these images.

The image on the right shows the dam and the adjacent Lake Nasser in the year 2020. This satellite image shows a composition of different bands based on Sentinel-2A data from the Copernicus programme. After downloading, the freely available multispectral satellite imagery was atmospherically corrected using free software. The True Colour Composite was calculated from the three visible bands red, green, and blue. With this Natural Colour composition, the image appears in colours which are similar to their appearance to the human eye. The spatial resolution of the image is 10 meters.

The comparison of the two images illustrates the filling of Lake Nasser after the dam was completed. On the dam itself, a hydroelectric power plant is in operation. On the left side of the picture, the Aswan International Airport can be seen. It was built in 1956 and can therefore also be detected (faintly) in the first picture from 1968.

Fun fact: In a spectacular action in the 1960s, the Egyptian temple of Abu Simbel was completely dismantled and rebuilt in a distance of 180 meters (and 64 m higher) to save it from the approaching water of the Aswan reservoir.