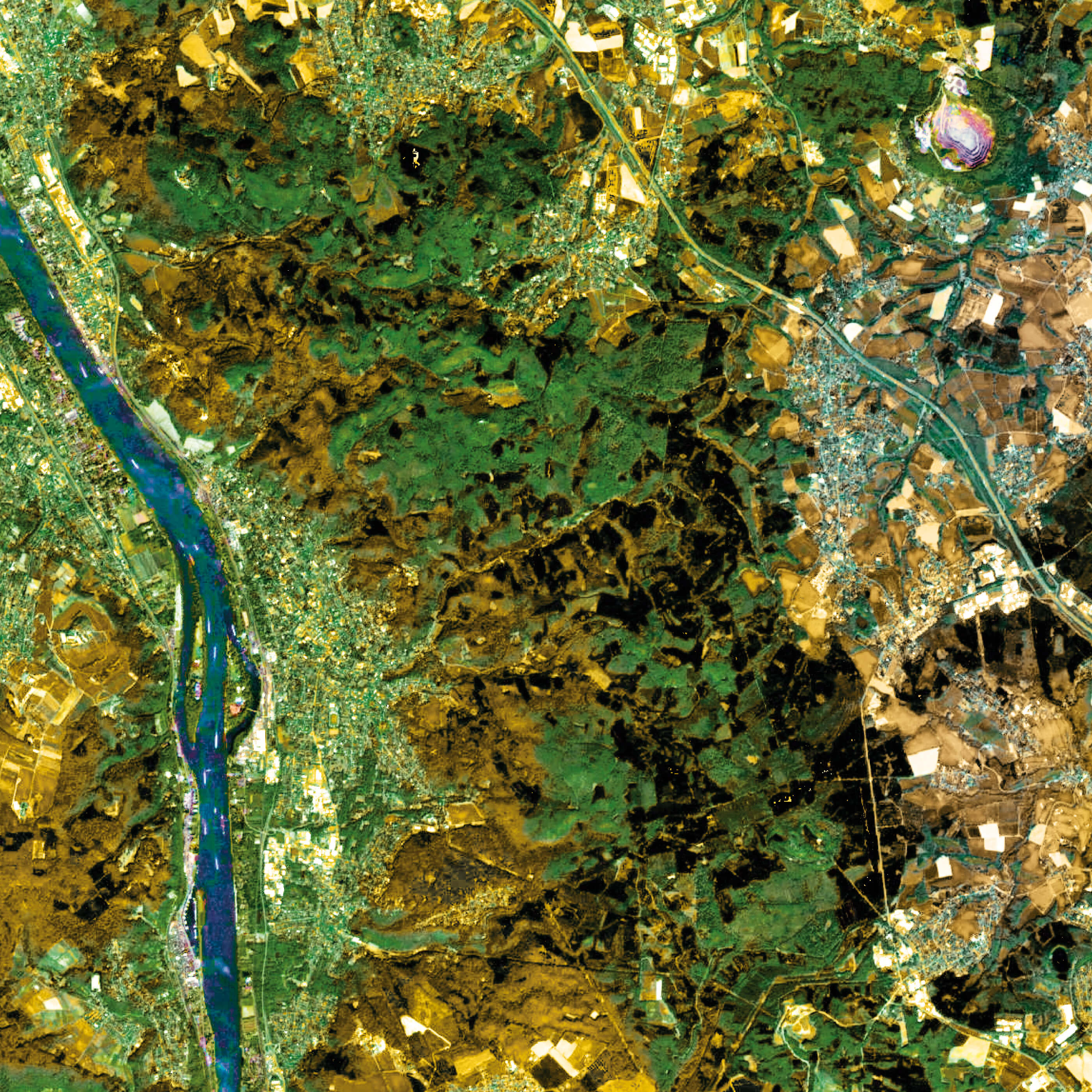 This time around, the satellite picture of the month depicts an area that is right at our doorstep: the Rhine and the Siebengebirge. In the west of the picture, one can see the two river islands of Grafenwerth and Nonnenwerth.

Grafenwerth is a Rhine island located in the town of Bad Honnef (situated at Rhine-kilometer 642). It lies opposite the island of Nonnenwerth and is part of a natural region in which the river widens in the Honnef valley. Geologically, it belongs to the Younger Low Terrace of the Rhine, whose deposits for the most part consist of sand and gravel. Two bridges, the Grafenwerth Bridge (1912) in the north and the Berck-Sur-Mer-Bridge (1977) in the south, as well as two separating embankement (or groins) in the island’s center and at its southern end, lead across the oxbow lake that separates the island from the mainland. The southern dam ectends all the way to the Lohfeld ferry.

Opposite Grafenwerth lies the island of Nonnenwerth – also a Rhine island and situated between Bad Honnef an Rolandswerth. Since the beginning of the 12th century, the island has been home to a Capuchin monastery, which was taken over by Franciscan nuns in 1854. Since that time, the monastery also houses a Franciscan educational institution, which began as a finishing school and was later turned into a high school.

In the northwest of the picture one can see the Drachenfels – a mountain in the Siebengebirge. It is located near the Rhine, between the towns Königswinter and Bad Honnef. Due to its castle ruin, its prominent position above the Rhine Valley, its appropriation as a subject for Rhine Romanisticm, and its early touristic development, the mountain is well-known – despite the fact its peak is only 321 meters above sea level.

The Drachenfels was formed by rising magma that did not penetrate the surface of the earth. Instead, it solidified below ground and formed dome-like structures. These are referred to by volcanologists as mamelons. There is documentation going as far back as Roman times that proves the existence of quarries (quartz trachyte) at the Drachenfels. Especially in the Middle Ages, the Drachenfels trachyte was an often used building stone in the Rhine area, used for example for the construction of the Cologne Cathedral.

In the northeast of the picture, one can see the Hühnerberg. Located near Willmeroth, it is the only active basalt quarry in the Siebengebirge. Characterized by its conical crater, the quarry extends for more than 900 meters from north to south and 500 meters from west to east. Originally, the Hühnerberg’s peak was situated at 336 meters. However, due to blasting operations, its height is now only 175 meters. The basalt, whose color ranges from black to dark gray, is a basic eruptive rock and has formed as a result of volcanic activity from magma that penetrated the durface and quickly solidified. The basalt deposit in the Siebengebirge dates back to volcanic activity over 20 million years ago.