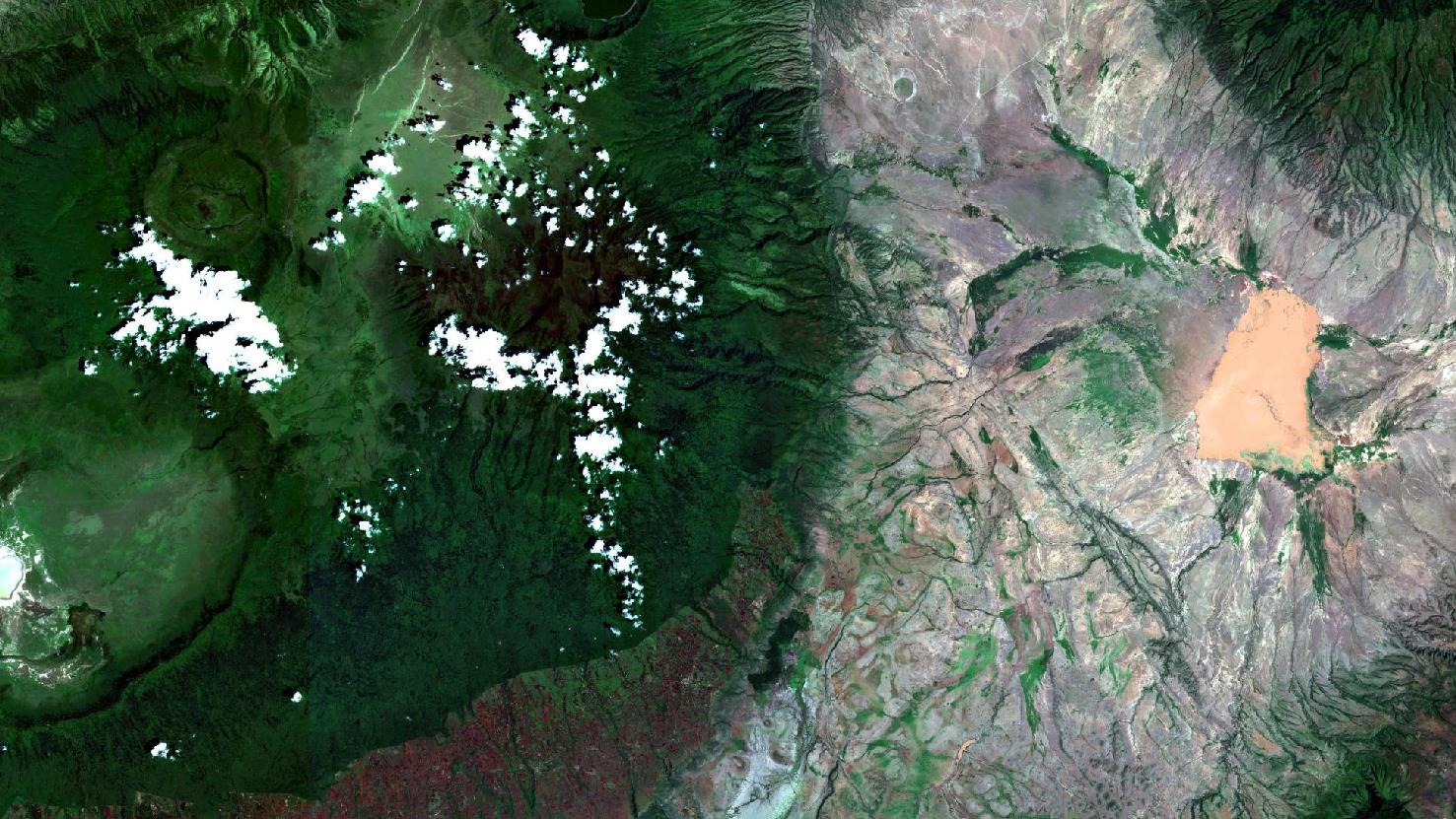 The satellite image of the month August shows a section of the Ngorongoro nature reserve in Tanzania. The image is based on Sentinel-2 data of the Copernicus program and shows a true color combination. After downloading the scene an atmospheric correction was carried out with free software and a color composite was calculated using three different spectral bands.

Ngorongoro is a burglary crater in Tanzania where a volcanic mountain collapsed on the edge of the Serengeti savannah. With its 8200 km² the whole Ngorongoro Nature Reserve covers large parts of the green crater highlands in the left half of the picture. The Ngorongoro reserve also includes the mountains Makerut and Oldeani with 3130 m and 3188 m height. The Ngorongoro crater itself is located on the left of the satellite image, with a slightly lighter green coloration of the vegetation inside the crater.

The picture was taken during the rainy season (April-November), as the vegetation is particularly green and fertile at this time. Nevertheless, the local climate varies greatly due to the different altitudes and the dynamics of the air masses. While the interior of the crater has a savannah-like climate, the highlands at the crater edges are rather damp and hazy and thus often overgrown with evergreen forests. The land outside the Ngorongoro reserve is characterized by significantly drier vegetation, as can also be seen in the satellite image in the right half of the picture from the brownish coloration.

The diameter of the crater is between 17 and 21 kilometres, while the entire Ngorongoro Nature Reserve covers 8200km2. About 25,000 large mammals populate the crater, including the highest predator density in Africa, making Tanzania and especially the Ngorongoro Crater a highly frequented destination for safaris.

But not only the nature makes Tanzania a popular country for tourists, but also this year’s FOSS4G Conference in Tanzania’s capital Dar es Salaam. From August 27 to 31, numerous workshops and lectures on open source software will take place, bringing together community members and interested parties from all over the world. Dar es Salaam is one of the fastest growing cities in Africa and is also a hub for innovation and research, making it an ideal venue for this year’s FOSS4G.