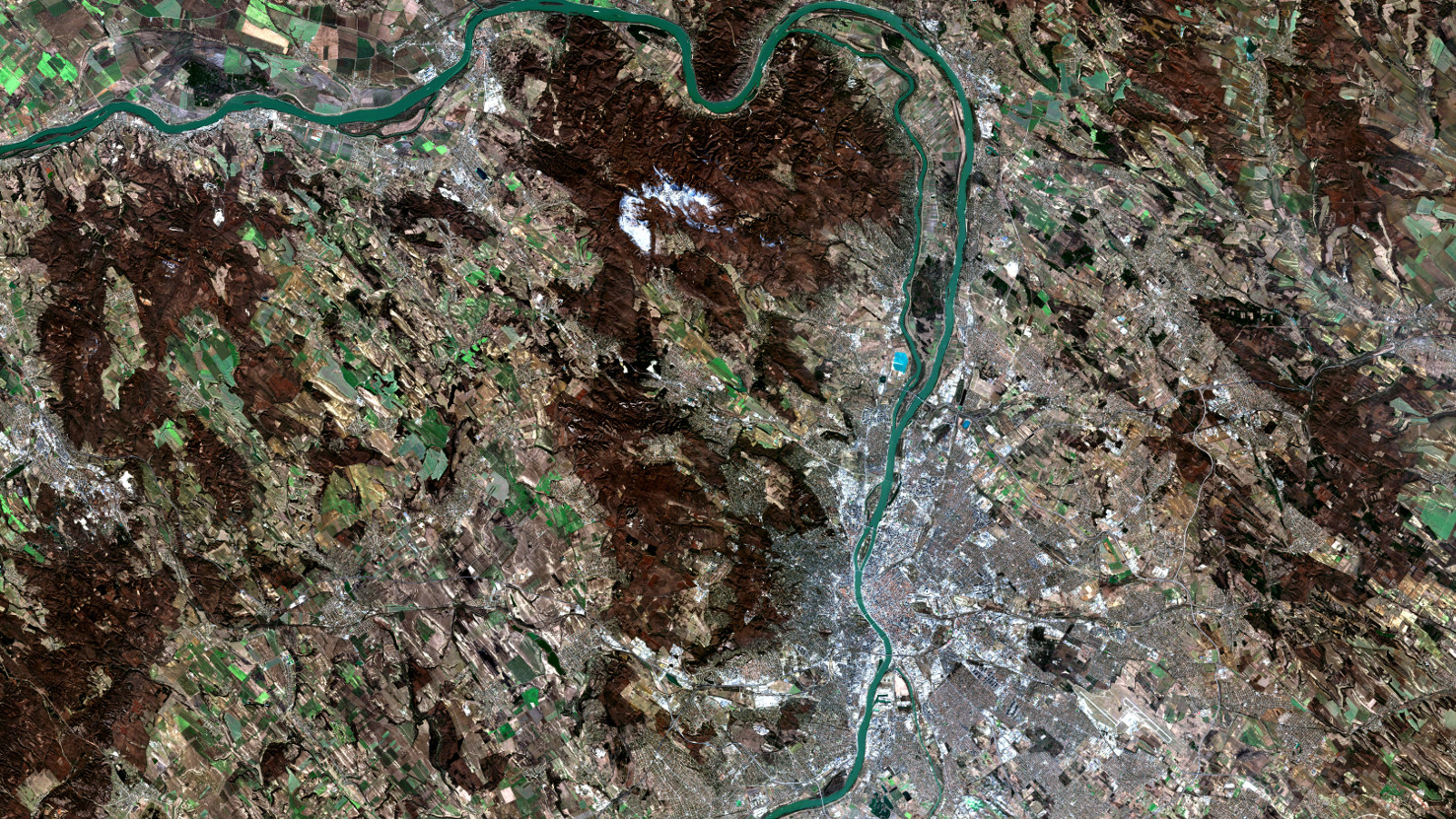 Our satellite picture of the month June shows the Danube in a true colour composite, coming from the west, as it turns in an arc to the south and flows through Budapest (in the lower right part of the picture). To the west of Budapest is the Budai Landscape Reserve, while the Duna Ipoly National Park lies in the “arch” of the Danube. In the middle of the picture, the light blue Lupa Lake, almost 100 hectares in size, is clearly visible not far from the Danube.

Budapest is the capital and largest city of Hungary. With over 1.7 million inhabitants, it is the tenth largest city in the European Union. The unified municipality of Budapest was formed in 1873 by the merger of the previously independent cities of Buda, Óbuda (both west of the Danube) and Pest east of the Danube. The 19th century chain bridge connects the hilly Buda district with the flat Pest. A cable car takes you up the castle hill to Buda’s Old Town, where the Historical Museum of Budapest displays the history of life in the city from Roman times. The Trinity Square is the site of the 13th century Matthias Church and the towers of the Fishermen’s Bastion.

Budapest lies on the Danube, which leaves the Hungarian low mountain range here and flows into the Hungarian lowlands. With a total length of 2857 kilometres, the Danube is the second longest river in Europe after the Volga. It flows through or touches ten countries (Germany, Austria, Slovakia, Hungary, Croatia, Serbia, Bulgaria, Romania, the Republic of Moldova and the Ukraine) – more than any other river on earth. The Danube takes its name from the union of two source rivers, the Brigach and the larger Breg, which both originate in the Middle Black Forest. It crosses three large basins: the northern foothills of the Alps and the Vienna Basin, the Pannonian Plain and the Wallachian Plain. The river flows into the Black Sea via the extensive Danube delta. The Danube is one of the oldest and most important European trade routes and connects many species-rich and unspoilt natural areas.

The motif is based on Sentinel-2A data from the EU Copernicus programme and shows a true colour composite. Sentinel-2 data are multispectral satellite images that are freely available. After the download the scene was atmosphere corrected with free software and a natural colour composite was calculated with different bands.
This „natural color“ band combination is as close to „true color“ as you can get with a Sentinel 2 image. Because the three visible bands are used which we see as red, green and blue, the image appears in colors which are similar to their appearance to the human eye. Vegetation is green, recently cleared fields are very light, soil is yellow and brown and roads and buildings are gray. This band combination provides the most water penetration so that soil in little depth can be observed. Clouds and snow appear white and are difficult to distinguish, although no snow is present in this image. Different kinds of vegetation are hard to distinguish as well as shallow water and soil. Sometimes this band combination appears hazy as these wavelengths cannot penetrate the atmosphere very well. These three bands provide a spatial resolution of 10 meters.