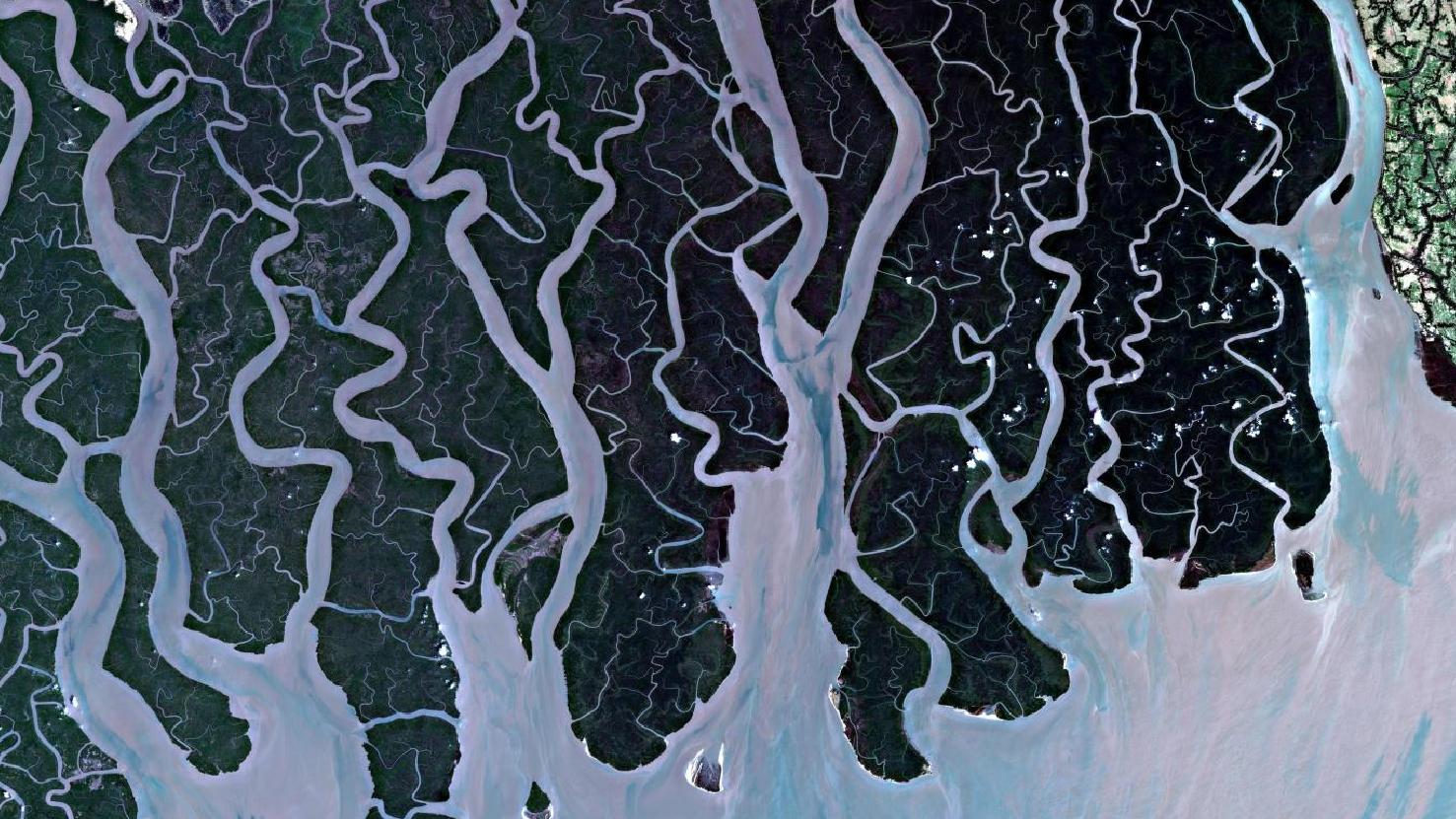 The satellite image of the month of September shows the so – called Sundarbans, the largest mangrove forests on earth, which are located at the Gulf of Bengal.
The larger part of the picture shows Bangladesh, a smaller western part is located in Indian territory.
The illustrated true color image was made up of different bands, based on Sentinel 2A data from the EU Copernicus program.
After the download, the scene was edited by us with Free Software.

The Sundarbans cover a total area of ​​approximately 10,000 km², of which accounts for approximately 2/5 in India and 3/5 in Bangladesh and accommodates in addition to a unique flora and fauna on the mainland and on the over 200 islands also about 13 million people.
The population shares the area with the population of the extinction threatened Bengal tigers, saltwater crocodiles, or even the Axishirsch, which is also threatened. About 25% of the total area are protected, while the Sundarbans National Park in India was declared a UNESCO World Heritage Site in 1987.

One can clearly see the numerous arms of the river running through the whole area of the mangrove forests and finally flowing into the Gulf of Bengal in the Indian Ocean. The area is irrigated by three main rivers, which are from west to east the river Ganges, the Brahmaputra and in the east the Meghna. In the Sundarbans area, all three rivers divide into several tributaries and thus form the branching river system. The sediments deposited by the rivers in the sea are clearly visible in pinkish grey tones.

Due to the annual monsoon and water masses from the Himalayas, especially the deep-lying southern Sundarbans are threatened by flooding, this threat to the people and animals living there is intensified by the climate-induced rise in sea level.
The inhabitants therefore try to flee further north from the southern Sundarbans in particular, where the arms of the river are not yet too wide and thus endangered to cross the banks, as in the south.

At the eastern edge of the satellite image, a small corner of delimiting vegetation can be seen: This differs markedly from the typical mangrove forests of the Sundarbans, which cause the characteristic dark green colouring, and visually separates the Sundarbans from the surrounding country.

What is not visible on the satellite image is the versatility of the mangrove islands and river arms in Sundarbans.
Due to floods, ocean currents and tectonic features, individual islands disappear, while new ones appear elsewhere or formerly sunken ones reappear.